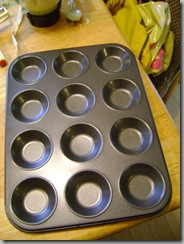 It’s actually a muffin top pan, if you’ll excuse the expression.  The holes are bigger than your average raviolus (word of the day!), but that’s okay, because I love BIG ravioli.

Why make ravioli?  Partly for fun, but mostly because they don’t sell decent kosher pasta anywhere in Toronto.  You used to be able to buy Pasta Quistini cheese- or veggie-filled tortellini and ravioli, but I haven’t seen the cheese ones in ages, and the veggie ones are both overpriced and not that exciting in flavour.

My theory has always been that eating kosher keeps me innovative and creative.  If I want to eat delicious food, I’m going to have to make it.  I have suffered through enough bowls of “Hot and Sour” soup in kosher “Chinese” restaurants to know that even if something exists, it may be nothing like the real thing.  And sometimes, there is no equivalent:  try finding kosher dim sum (actually, they used to have some… haven’t seen it in years).

So I make it myself.  Haven’t done it much in recent years, but when I only had two children, and they were no longer babies, I really did bringing the varied and exotic flavours of the world to my kosher kitchen… perhaps someday soon, I will again.

(Actually, fellow Village Shul’er Shaby has recently set up her own site offering “Spicy Kosher” – Indian recipes and other “exotic” dishes.  She is half-Indian and half-Iranian, so you know her stuff must be authentic…!)

They do sell actual ravioli makers.  There are two kinds, one that attaches to my pasta maker and costs maybe about $70-80.  The other is just a mold, like my muffin-top pan, only smaller and with less space between the ravioli; these probably cost about $10-15.  The molds do slightly score or cut the dough – different brands do better or worse with this. 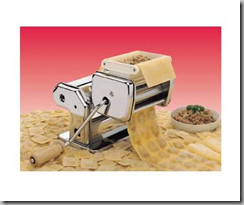 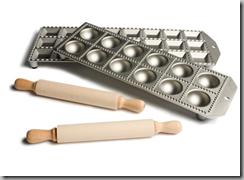 But my pan cost $7 at Superstore this morning, and most importantly, was the only option available at 8:30 am.  And it worked great!

First, make the filling.  This is a squash (local; buttercup).  I roasted it until it was very soft, then puréed it with a tub of ricotta cheese, one egg, and a little bit of salt.  The blender was almost full when I started; this is near the end of the process.  Looks disgusting, but I promise, it’s an amazing flavour.  You can also do spinach/ricotta; last time I did kale/ricotta.  Oh – forgot one ingredient:  I like to roast a garlic head and squeeze it in there, too. 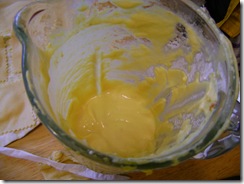 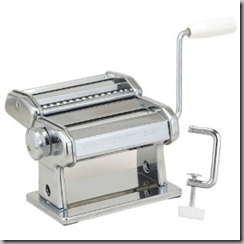 Roll out rested pasta dough as thinly as possible.  I use a #6 setting on my pasta maker because anything thinner starts getting unwieldy.  If I get braver, I’ll probably try for 7 next time.

Remember, when you make ravioli, it’s doubled up, and you don’t want to be chewing on a wad of dough.

Lay one sheet of rolled-out pasta over 8 holes of the muffin-top pan.

Plop a teaspoonful of filling over each hole: 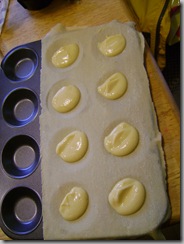 Lay a second sheet over the first and gently stretch it so it reaches both sides.  Press firmly on the metal rim all around each blob of filling. 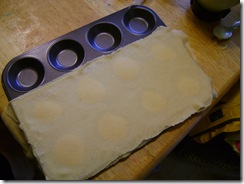 Now pick up one end of the strip and flip it upside-down onto the table top – whee! 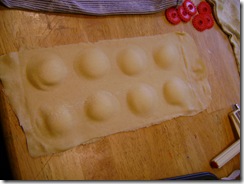 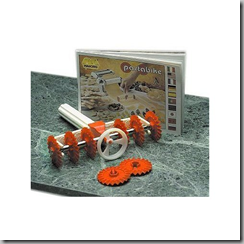 You can kind of see in the background that I’ve removed all the wheels but one from my PastaBike, a nifty gizmo that came free with my pasta maker.  This gadget lets you cut things out in parallel and holds from 1-7 wheels, plus a little round thingy that I’ve never figured out.

Anyway, if you take out all the wheels but one, it’s perfect for scoring pasta with one nice, straight “jagged” line.

Score all around each blob of filling.  (This is the part that is kind of automated with the pre-cut mold.) 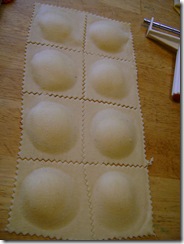 Now just separate each raviolus and lay it to dry on floured couches (a French word meaning diaper or bed, which in this case refers to tightly-woven tea towels).   Flip the ravioli every 10-15 minutes for a couple of hours until slightly dry and firm.  Keep them floured and separate until they are dry or they will stick to everything and open up and make a huge mess! 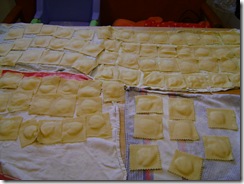 Eighty ravioli, all lined up and ready to go!

When you’re ready to eat, boil 3-5 minutes until al dente.  Serve with a very simple homemade sauce.  Don’t smother them in sauce, just ladle a bit over the top.  You want the pasta to shine.

Sprinkle with the best kosher Parmesan you can find.  Eat.  Enjoy.