Finally got all three  sub-i planters ramped up into productivity mode.  I made these three last summer.  I’ll throw in some links below about how they were made, because it is SO unbelievably inexpensive to make them and so rewarding compared to growing stuff in plain old pots.

Do a test, if you don’t believe me.  Buy two identical seedlings and stick one in a pot and one in a cheapo sub-i planter, and then get back to me about which one survived the summer.

Sub-irrigation (aka “self-watering” – a misnomer unless your planter has a hose connection and/or legs), is actually, secretly, deep down, my Grand-Scheme of Things Plan, capital P, for gardening in Israel.  Water is so precious there, of course, that you can’t just throw it in the air and hope stuff gets wet, like we do here.  But I hope, using some combination of sub-i planters and grey water (ie milchig and pareve dishwater, and perhaps laundry rinse water as well), that at least a few containers could be a possibility.

Anyway, I do plan on putting tomatoes in all three of these planters later on, but for now, I thought I’d get them going on some green stuff.

All seedlings were store-bought.  I have no doubt I could start kale, spinach, etc., from seed, and have done at least spinach in past, but it takes forever and they are SO cheap in the store.  Like $1.49 for a tray of four kales or spinach seedlings.  All the angst of seed-starting to save yourself… well, maybe 50 cents a plant.  Even I am not that cheap.  At least, not this year. 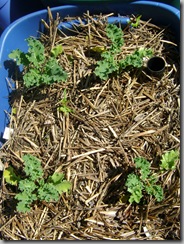 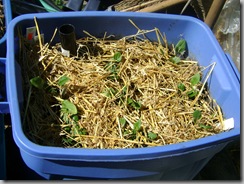 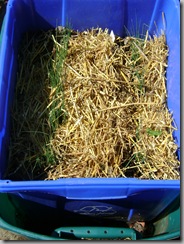 I made all three of these planters last year, and hope to add at least one more this year.  The first two are identical, my basic planters that cost a few dollars (at WalMart, ugh).  And this is one I’m particularly proud of, hand-crafted for FREE from a bin I found by the side of the road for exactly ZERO dollars!!!

So there.  Make your planters on the cheap and what you save on the 50-buck EarthBox, you can splurge on the $1.50 seedlings!