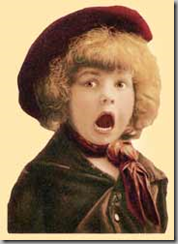 Sea chanties, ditties, whatever you want to call them.  Folksongs, all one word.  Not cool, like “folk" music, which some might call what my sister sings.  Nope… the worst kinds of cheery (or dismal) classic tuneful ballads.

Which is why it is so very great that Charlotte Mason homeschoolers generally include in their roundup of learning (along with classical composers, artists, Shakespeare plays, etc.) the systematic study of folksongs!

Ambleside Online, a CM homeschooling community, divides the school year arbitrarily into “terms”:  Term 1 = September –November; Term 2 = January –March; Term 3 = April –June.  And then there is an arbitrary folksong assigned to each term of each year.  For example, we are currently in Term 3 of the 2009/2010 school year, so this term’s folksong is “Farewell to Nova Scotia.”

You can hear the Irish Rovers singing it on YouTube here.

(Hey, did you know that the Irish Rovers’ Unicorn Song, which Ted & the kids all love, was originally written by Canadian poet Shel Silverstein – of Where the Sidewalk Ends and The Giving Tree fame???)

Like I said, the song selection is arbitrary, but it’s kind of cool feeling that there is some kind of community “out there.”  And knowing that (hopefully) I wasn’t the only geeky homeschooling mama out there belting out “Farewell to Nova Scotia” this morning!

Here’s the complete Ambleside Online folksong rotatation, if you’re interested.  Term 3 is over soon, but since we did pretty much nothing for Terms 1 and 2, I wouldn’t be averse to taking on a new folksong for the July-August “term.”  I’d probably do “Land of the Silver Birch”, which was the Term 2 selection this year.

And I’m definitely in for “Waltzing Matilda” in September.  Australia’s fake –slash- unofficial national anthem?  We love it!!!  (especially the Aboriginal version sung by Trevor Adamson on Putumayo’s World Playground album!!! – click here for lyrics; scroll down to Page 4)