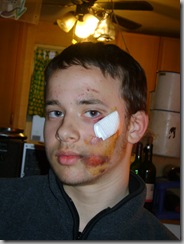 One EMT transport, two phone calls (one home, which I couldn’t answer in time; one to my mother, who went to the scene), four hours in emerg, fifteen minutes in the CT scanner, a bazillion shots of lidocaine and two big burly guys (one from Australia) to yank his arm into alignment, a great big fluffy flannel cast (weird) and a ton of bruises later ... and he's okay!

[EDITED TO ADD:  one pair of glasses, the second destroyed of two purchased, meaning tomorrow is GLASSES DAY.]

He was trying something dumb on his bike... and it didn't quite work out.   I suspect he was attempting to ride on this raised curb on Bathurst St, just south of Glencairn, on his way home from school:

He would like me to point out that it is ironic that he was injured falling off his bicycle on his way to jump off high objects.  He was having so much fun climbing up (and jumping off?) my mother’s garage roof last night, I think he was hoping to do more of the same on his way home.

I don’t want to pin this adventure- and danger-seeking behaviour on anybody, but it is interesting that this fascination with high places and jumping off comes just a couple of weeks after his Pesach rock-climbing expedition with a certain wonderful, loving relative.

So now I am sitting here wondering if there is some connection between his obsessing about things, his wanting to do them over and over and over unceasingly that may have led to increasingly dangerous behaviour on his bicycle.

Anyway, luckily, he was wearing his helmet.   Baruch Hashem.  Everybody at the hospital commented because the helmet came with him in his possessions bag.  I guess because they see the kids who weren’t wearing theirs.  They are the ones who have to hook those kids up to life support.

Luckily, the police are not pressing charges.  Like YM said, though, we’re not sure what they would have charged him with – dangerous driving?  Maybe they just said it to scare my mother.  Anyway, they mentioned charges and that they were not pressing any.  Good enough for me! 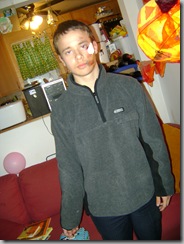 In these pictures, he is wearing my sweatshirt; it’s the only thing he can get on over his great fluffy puffy cast of an arm.

He can barely bend his elbow; the cast stops short of it, but it is SOooo heavy!

This is definitely not one of the sleek colourful modern fiberglass or plastic casts you see nowadays.  This is a very old-school cast.  You can’t even sign it… though it might work if you tried it with a Sharpie or some other fabric pen!

We do have to go down to the fracture clinic once a week to make sure the wrist (that’s what broke) stays in alignment.  If it doesn’t, they’ll have to cut him open.

They did say at the hospital that he was extremely polite and mature.  YM says, “of course… all their patients are like screaming eight-year-olds.”  But he really was a gentleman, from what I could see.  He told them the pain never went about a 3.5 (out of 10), and refused all painkillers.  I swear, he has different nerve endings from the rest of humanity.

Anyway, I made him take an ibuprofen before bed, both to help him sleep and because it helps with swelling.  So that’s our afternoon!

Ted said, “I guess you’ll have a lot to blog about today, right?”  But secretly, I’m kind of annoyed having to chronicle this because I can’t write my usual tediously philosophical navel-gazing drivel, but that’s just me.

I guess there’ll be time enough for that tomorrow, assuming nothing else happens.