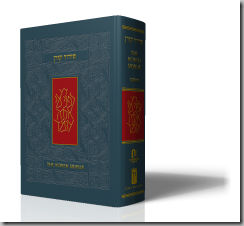 Now, how often is it that you hear those words together – “snazzy” and “siddur”???

But, yes, I have leapt on the Rabbi Dr. Sir Professor Jonathan Sacks Bandwagon and invested in my first non-Artscroll siddur in years (okay, not counting the small shacharis-only siddur I bought for my sister’s birthday – which is terrific, btw; I don’t remember if I posted about it here but I like it very much).

After reading Rabbi Martin Lockshin’s thoughtful discussion of the new(ish) Koren Sacks Siddur vs Artscroll, I realized I simply must have it.

My own humble first impressions:

From a strictly aesthetic standpoint, the Koren Sacks wins hands-down.  Such thoughtful layouts (one pasuk per line!)!  Such helpful pagination (all of havdalah, on a single page!)!  So much white space… wow; almost literally a breath of fresh air.

And I had forgotten – over 20 years, I guess I became numbed – how much I utterly HATED the all-italicized English text in every single Artscroll siddur I’ve ever seen.

It was not exactly love at first sight  when it came to the special, copyrighted Koren font used for the Hebrew text throughout.  I actually prefer the clear Artscroll font slightly… slightly.  I can easily imagine the Koren font will grow on me; it looks almost like super-neat Hebrew handwriting, as opposed to the crisp, almost-robotic Artscroll font.

Here is a non-judgmental review (cuz some people get pretty passionate!) of some siddur fonts.

1) First, the traditional Ashkenazi basic illegible siddur font.  I don’t love it.  And most of the siddurs that use these fonts also offer blurry, illegible and crooked text, as though the whole siddur has been photocopied badly in the shul’s office.  Pheh.  It is the 21st century.  To its credit, some people feel right at home with this type of font and printing; maybe they feel it brings them closer to the tefillos of their ancestors.  I am not one of them. 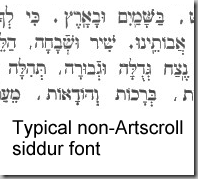 2)  And here’s Artscroll’s revolutionary, crisp, clean font.  I like it a lot, though some have argued that it strips the letters of their beauty and dignity.  Fine; it’s also very easy to learn from, though… and as a BT, this was the font I cut my teeth on.  I already knew Hebrew, but didn’t really have a clue about davening.  Artscroll made it easy – as long as my gaze didn’t wander across the page to that awful italicized English.

3) Finally, here is a selection from the Koren Sacks siddur.  As I said, it looks more hand-written; apparently, it’s more rooted in  Sephardi traditions.  It definitely looks more like what you’d see in a sefer Torah.  Like I said, I could easily imagine coming to love this font, especially if everything else about this siddur feels right. 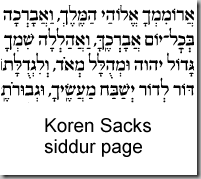 The translations I’ve read through are fine so far.  I’m not dazzled by them, but then, I was never really turned off by Artscroll’s.  I also haven’t looked at any of the controversial egalitarian bits.  The first thing you notice after 20 years of Artscroll, however, is the absence of the word HASHEM screaming at you off the page.

Sacks uses the word LORD instead, which I don’t love, but I guess the alternative is using the non-gender-specific but also kind of annoying ADONAI, or some such.

The bentsching does, as Rabbi Lockshin mentions, include a suggestion that three women who have eaten together may lead a zimmun, beginning with the words “chavrotai, nevareich.”  Not exactly a revolution, but it’s kind of nice to see it in print.  There is also the famous inclusion of “Modah” along with “Modeh ani,”

Back on the bentsching, I am a bit disappointed that the Koren Sacks doesn’t seem to include instructions and compensatory passages for “tacking on” a section of the bentsching that was missed… but that was just after a cursory glance; this information may be elsewhere.

Speaking of elsewhere, just about everything is.  While Artscroll lays out tefillos pretty much in the same-old, same-old order of the old-style Ashkenazi siddurim, Sacks shuffles things around a bit more.  For example (back to bentsching AGAIN!), Birkas Hamazon is included in a special section of Giving Thanks, rather than in a general “brachos” section immediately following the weekday Shacharis.

Individual sections of the book, including Weekdays, Shabbat, Festivals, Giving Thanks, Life Cycle, etc., each have their own index.  This might be more helpful if those pages were marked with thumb tabs or indentations or something, but that would increase the cost of the book.  As it is, I don’t find them particularly useful, since if I’m already in the Shabbos (okay, Shabbat!) section, I can probably find Shacharis (Shacharit!) just fine on my own.

Oh.  Yeah.  Shabbat.  The siddur says “Shabbat”, “Se’uda Shelishit” etc, in fine Sephardit fashion.  Which is lovely and precise and trips off the tongue except if you happen to be a proud Ashkenazi like me.

When did the contemporary situation degenerate to the point where if you are happy to pronounce something the way your ancestors did (Shabbos, shalosheudos, shacharis!) – if you perhaps find those ancient pronunciations slightly richer than other ancient pronunciations – then you are some kind of repressive chareidi fascist fanatic?  (Is that too many adjectives?)

I guess my only disappointment with this suddur, if you can call it that, although it bears the word Ashkenaz in Hebrew on the spine, it is entirely Sephardit in its pronunciations throughout.  To me, this is not comforting.  To me, this draws lines which I am miserable having to choosing sides over.

Me Ashkenazi.  Me want Ashkenazi siddur.  (This is primal, people!)

If I love the State of Israel, I’ve gotta daven like an Israeli… why, exactly?  And why can’t the ladies lead a zimmun on Shabbos… only on Shabbat?  Can’t we all just get along?  (Here’s a bit more of a rant about me and my Ashkenazi inclinations.)

As an aside, I do not like that its promotion is billing this as an “Orthodox” siddur, nor do I necessarily love the OU imprimatur on the spine, though it gives me hope that the OU is not succumbing to any kind of chareidi pressures in the near future.  I think this is all mostly because I distrust the word “Orthodox.”  Perhaps it’s just me.

One more beef, and it’s a little one, because it’s always easier to  nitpick over someone’s masterpiece, and I do not want to undermine in the least the fabulous and important work Rabbi Sacks has done here.

Shacharis or Shacharit; however you want to say it, spell it with a CH, please.  I dunno why.  KH bugs me to no end, but Rabbi Sacks has opted for the very, very awkward use of h-with-a-dot-under-it.

Here is my opinion of just such a “dotty” ches.  Oh, did you think you were reading a review by an intelligent, thinking person?  Well, I go kind of irrational when confronted with random specks on the page.

Still and all, and despite these few minor quirks (okay, the pronunciation is not minor), I have to say… I love this siddur.  I am irrationally excited about it.  The tefillos are the same, obviously, but laid out so beautifully that it is easy to approach them with excitement.  It is a beautiful book, and I recommend it to anyone who’d love to loosen Artscroll’s death grip on the siddur world.

Oh – I did have a bit of a choice when I bought the siddur.  The bookstore lady offered me the “Canadian” version, which apparently differs only in that it offers a tefillah for the government of Canada.  In a fit of rebellion, I opted for the “non-Canadian” edition, which is really the U.S. edition.  No idea why, nor why they’d carry both.

But in any event, our shul doesn’t use the same tefillah for Canada – nor does it include the regular version of the tefillah for the State of Israel.  Tactfully, they omit “reishis tzmichas geulaseinu”… apparently, the modern State of Israel is something, but it is not (in their opinion), the dawn of our redemption, or its first sprouting, or anything potentially messianic or wonderful.

The tefillah they do say has always made me uneasy for its nonstandard wording, but at least it’s something; many shuls don’t even acknowledge Israel’s wellbeing from the bimah on a regular basis.

Luckily, I even got to use the siddur for the Tefillah for the State of Israel today.  How?  Well, that’s a subject for a whole ‘nother post!