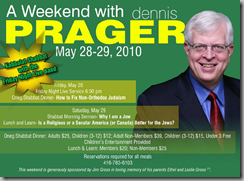 Oooh, I’m so excited, and it’s just down the street from me, too! Closer than my own shul, even!

His talk on Friday night is “How to fix non-Orthodox Judaism,” which is unbelievably intriguing to me. I mean, if it could be FIXED, maybe I could join in again, right?

Of course, I’m being tongue-in-cheek. Because it all depends what you mean by FIXED. Nevertheless, I’m intrigued, and I think my mother, who’s just been taking a course on denominational Judaism (taught by Conservative rabbis) might be interested as well. And Ted, who happily joins me on any and all Prager-related errands.

(So far, Ted & I have been to hear him more than any other speaker, including local speakers… I believe it’s five times, but perhaps only 4: Pride of Israel, Leah Posluns; hmm… I forget where else we’ve heard him. Suffice to say, we’d go hear him in a bar, mosque, church, anywhere as long as he was at the front of the room!)

Slightly less interesting is his Shabbos morning sermon: “Why I am a Jew.” I mean, he’s written books and books about that… I don’t think there will be any surprises, though I’m happy to go and check it out.

And then there is the lunch and learn, which is totally uninteresting to me: “Is a religious or secular America (or Canada) Better for the Jews?” I suspect he will come out on the side of religious – ie that any values-based, Bible-based culture is better than a valueless culture of apathy and false gods.

I also suspect he will end up saying America most of the time, or simply substituting the word Canada into his usual talk, which speakers do to not offend anyone, but is most annoying, because politically, economically, societally, Canada is most definitely NOT America.

Anyway, he’s coming, and I want to attend the Friday-night talk, though I don’t want to pay $175 for our family to eat at the Oneg Shabbat dinner. SO… I recently wrote a nice article which included quotes on accessibility from the shul in question, and have emailed my contact person there to see if she could sneak me in.