Off the wagon… and into the carriage? 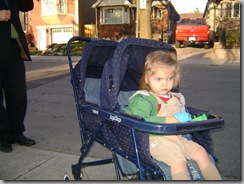 I’ve been SO good.  So very, very good about not acquiring any new carriages.  But sometimes, it’s just stroller karma, and I can’t help it.

Out walking on Glen Cedar today (with the pretty-good navy BabyTrend side-by-side double my mother found at the curb for me!), I found an older-model Peg Perego Tender Twin front-to-back double.

The problem:  how to schlep the HUGE Peg Perego home with us?  No problem!  It folded pretty smoothly and I stashed it on top of the hood of the BabyTrend to bring it home and test it out.  We were an extra-wide load,  however, and I didn’t even bother trying to wheel the wide double with the wider folded double into either of the stores we visited along Eglinton; I just left it parked out front… both kids can walk, after all.

I have wanted a Peg Perego front-to-back double for, ooh, maybe about fifteen years, since I knew that I would be having two babies back to back.  Instead, we were given a Graco (?) or some other cheapo brand that NEVER worked well.  Even with Elisheva as a newborn, the thing simply did not want to turn.  You had to HAUL it around corners.

It was a gift, and I was gracious, but I did end up selling it the first chance I got (and yes, feeling sorry for the buyers, though it was in brand-new condition).  With that money, I bought a side-by-side Peg Perego folding double (Colibri) which served us well until it died; I seem to remember it literally fell apart from overuse.

The nice thing about that double was not only that a) it folded pretty compact for a double (it was basically two Plikos side by side), but also b) if you needed to go through a particularly tight doorway, you could pull the “collapse” lever.  It wouldn’t actually collapse (yay, safety feature!), but it would squish in by a couple of inches, which allowed you to get through the doorway.  Then you’d just have to “re-open” the frame by stepping on the crossbar to lock it open again. 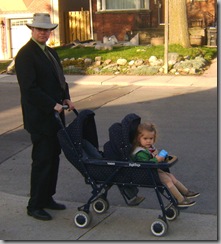 Anyway, Shabbos looms and I’m sure nobody cares about strollers I loved thirteen years ago.  The point is, I found this one and it is actually fairly easy to push, even with both BIG kids in it.  It also has the weird sliding-removable-basket feature, as seen on the Roma and I believe also the Milano.

The basket actually slides out completely and has its own carrying handles; I guess you’re supposed to haul it around the market as you buy your five apples and a banana (it’s really quite small), then slide it back under the carriage to bring it home.  In any event, the basket is missing in these pictures because I took it out to clean it and forgot to slide it back in before Ted left for shul with Gavriel Zev.

And no, I’m not proud of the fact that my son is going to SHUL in beige corduroy overalls that are so short they regularly hike themselves up past his knees.  All the Shabbos clothes were in my bedroom, where Naomi was sleeping.  So that’s my excuse.