My NEW “next coffee maker”

Now that my bodum has turned me into a bit of a coffee snob, I started thinking I wanted an Aeropress.

Okay, actually, truth? The SAME week my sister Sara bought me the Bodum, a facebook friend bragged that she’d bought an Aeropress. Same principle as the Bodum, but a little more space-age. Just the top part in this picture is the Aeropress, by the way (which, by the way number two, is made by the same Aerobie people who make weird shapes of floppy frisbee); underneath the Aeropress, you can use any sort of mug you want.

Some people swear by the Aeropress, saying that it reflects the best of all worlds. Like the bodum, you are pressing… but unlike the bodum, the grounds are not sitting in your coffee. You press it through so quickly that there is no time, I think, for the bitterness and oiliness to come out; just rich, smooth coffee. 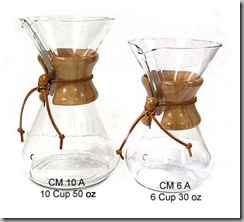 So that’s what I was thinking I wanted, but when I went today to research what would be the utterly most geekiness in home coffee brewing equipment, I discovered the sleek-but-apparently-effective Chemex, which promptly head-butted the Aeropress out of the way for the coveted title of “Next Coffee Maker.”

According to the true geeks (which is not me), the big difference between this glass thing and the plastic cones lies in the filters, which are thicker than regular filters. Like, superthick filters. Filters you could use as a parachute in a military application and rest assured you would land safely.

So could you use the Chemex filters in a plastic cone drip one-cup coffee maker? Maybe, maybe.

But I’m not taking any chances with my coffee. Plus, the plastic thing doesn’t come with that cool wooden collar or leather lanyard around the neck. What is that, anyway? It even has a matching bead? And I don’t think the plastic cones have been immortalized as part of the permanent collection of the Museum of Modern Art in New York, something Chemex owners apparently never let you forget.

By the way, lest you think I am in any way dissatisfied with my present coffee-making methodology of present coffee flavour results, I’m not. I actually enjoy what I get out of the bodum a lot. Quite a lot. I love the bodum.

But being a coffee geek is apparently all about the gear. Some folks have five or eight or ten different ways to make coffee in the morning.

And right now, there are so many ways in which I’m downsizing: the number of carriages we own, baby carriers (gulp; I haven’t even used the Ergo in over 6 months…), even diapers (well, we need more because they’re falling apart, but we are going through about ten a week at this rate).

Which has left a “gear gap” just waiting to be filled… perhaps, someday, with caffeine geekery and paraphernalia!

Now, if only I had the funds to underwrite this exciting new habit.