In case of emergency 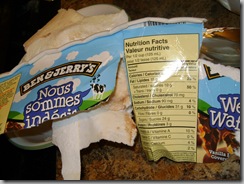 In case of ice cream too frozen to scoop:

Hack at outer wrapping mercilessly with sharp knife until it yields.  Peel packaging off in great primordial chunks and toss in whatever bin is closest.  Eat.  Enjoy. 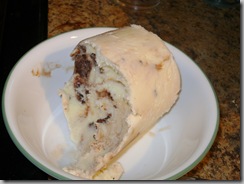 As with cocktails, I feel like 7:30 p.m. is somehow too early to be eating ice cream.  But Ted’s at his pottery class, YM went to learning, and Elisheva took the little kids out to the park (in return for a library book she’s been bugging me for weeks to get her!).

So I am all by myself, here, sick with a miserable runny-nose cold – the very worst kind.  In the rare and deafening silence that descended on the house when the kids left, I heard the ice cream calling to me plaintively from the downstairs freezer… where it indeed was much too cold to scoop.  Ergo, the sharp knife.

p.s.  This is NOT  my favourite Ben & Jerry’s flavour (that would be chocolate fudge brownie), but any port in a storm.