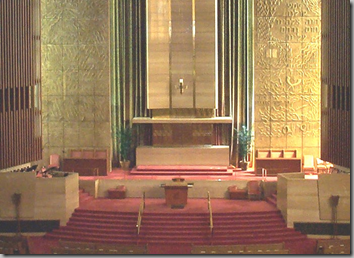 Just for fun, I brought my wonderful new siddur along for its Inaugural Davening down the street to Beth Tzedec, one of two local Conservative congregations.

This happens to be the monster shul in town, not to mention the shul I grew up in.  These days, they’re calling it the Synaplex.  Get it?

I don’t think I’ve been there since my Uncle Abe’s funeral many years ago, but that was an awfully long time ago, so that may not be true.

The occasion was Shabbat Itanu, a Shabbos of inclusion for a number of shuls around the GTA.  Beth Tzedec’s participation included hiring a sign-language interpreter for the main sanctuary today, so I decided to head over to watch.

Elisheva decided to tag along.  I actually debated inviting her along, because I thought it might be detrimental to her spiritual well-being.  But then I decided she SHOULD see what they do there; that it might be an education.  It sure was.

It’s a good thing we went – otherwise, the interpreter would have been signing to… NOBODY.

I didn’t see a single other person present who was watching the interpreter, despite the fact that the rabbi assured me that the event would be publicized well.  Sigh.  It was very interesting, though he was much too fast for me to follow most of what he was signing.  It was fun watching him sign “CONTINUE READING TORAH” over and over.

During one of the rabbi’s explanations, I tried to catch the sign for “scaly skin eruptions” – the phrase both rabbis insisted on using instead of the inaccurate term “leprosy” – but couldn’t manage it.  Funny moment, though:  a baby started making noise up front, and I caught the interpreter signing “BABY CRY.”  Two signs I know very, very well.

As for Elisheva’s education in Conservative Judaism, well, score MANY, many points for the Village Shul, or just about any other shul she’s been to.   It’s as if everything I hated about being part of the Conservative movement all came to the fore during one long, long, tedious service.

The laining was long (not their fault; Tazria-Metzora it is the longest of the year, I believe), but the two bar mitzvah boys were both exquisitely slow and horrendously incompetent.  The chazzan and choir were pompous to the point of ridiculousness, as was the rabbi speaking simultaneously to both bar mitzvah boys, offering them “four reasons why today is special.”

The first thing she picked up on – after calculating how many times our entire house would fit in the volume of the main sanctuary (about twenty) – was that there were about twenty microphones visible, on the bimah, hanging from the ceiling, everywhere… along with a polite notice in the bulletin that “use of electronic devices is prohibited on Shabbat.”

Ah, the Conservative movement!  What a quirky mess o’ contradictions!

There was a sparse crowd when we first arrived, which later filled in to a pretty respectable showing; it’s always embarrassing when that huge sanctuary is nearly vacant.

The silent shemoneh esrei of Musaf was just about as fast as fast could be.  I was nowhere near finished when the rabbi interrupted with a tefillah for people who are sick, and just barely had time to whip through before they started the repetition.  To his credit, he urged people who weren’t finished yet to continue their own silent tefillos; from what I could see, nobody did.  They are just all super-fast daveners, I guess.

Then there were the old guys sitting in front of us talking.  Okay, everybody talked through the whole thing, but unlike at our shul, the place is so cavernously huge that it doesn’t disturb anybody if you talk!  Nobody will hear you except maybe people sitting one seat away.

So these guys were sitting talking, and when the rabbi began reading the (really, really long) yahrzeit list, this one guy kept repeating about every fourth name… friends of his, I guess, who had escaped his vocal range for the time being.  During Adon Olam, he turned around and started belting out the (wrong) words.  It actually made me a bit nostalgic at that point:  he reminded me of my grandfather.

The last few minutes of the service were entirely occupied with alternately standing and sitting… I got befuddled at one point and sat down during Kaddish, because that’s what everybody does there.  I stand during Kaddish, whether or not I’m saying it myself.  Minhag Conservative is that everybody who isn’t should sit down.  So I accidentally sat, and didn’t want to get up again in the middle.  It was all highly aerobic.

Later, Elisheva and I went and found the portrait of my grandfather, up on the Wall of Presidents for the one year he served, then we took a slice of spongey marble cake, thanked the interpreter (nobody else was speaking to him) and left.  Oh, the interpreter told me that if I practice for six months to a year, I can become fluent in sign language.  Nice.

I didn’t mention that it’s already been more than six months… and then again, I do already know how to say (lie), “I live in a seven-storey building.”  So I guess I’m fluent now!

The Koren Sacks siddur was out of place there…but then, so were we.  Glad I got that out of my system; now I don’t have to go back for another very long time.