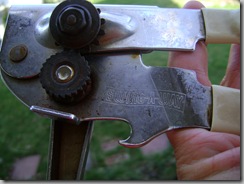 My sister told me before Pesach that once, long, long ago, I told her – apparently quite emphatically – that the only can opener worth investing in was a Swing-a-Way.

Now, that is kind of a trivial bit of wisdom for a big sister to share with a little sister.

On that other hand, it is so true.

It is so nice to have my two nice swing-a-way can openers back after a week of struggling with inferior Pesach can openers.

The fleishik one, a kitschy red plastic one that saws off the top, broke completely erev Pesach.  The milchig one is a little more subtle.  It LOOKS exactly like a swing-a-way.  But it isn’t, and as such, it doesn’t work nearly as well.

I love them more than life itself.

And as far as wisdom goes, how bad a thing can it be that, long after I’m gone, my old, old sister will go into the kitchen, pop open a can with ease, and think of me?