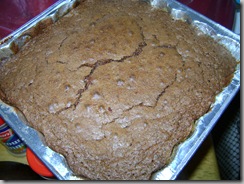 I’m in the middle of posting my one-pan, one-spoon, no-mess brownie recipe to my Bread Blog (because I set it up, officially, to cover breads and cakes, and I have decided that brownies are a kind of cake).

Now, by “used to,” I don’t know… it could have been once or maybe three times.  It wasn’t a regular thing because my mother has always been the strongly-in-charge captain of her own kitchen, and I never really made a habit of cooking when I lived at home.

It was very liberating – unbelievably liberating – when I moved into my mother-in-law’s house (well, she wasn’t my mother-in-law yet at the time, but she later became it and I still call her that, and what are you going to do about it…?).  I discovered that not everybody cares so deeply about which glass goes where in the dishwasher and that she was perfectly happy to have me doing my little cooky-bakey experiments with her stuff.

So I didn’t make these with my sister often, and in fact, I still have a mental note in the back of my head to do it MORE often, because it was nice and it was fun and because I love doing stuff with her.  Now this is a weird mental note, a little simmery back-burner thing I never got around to doing so it’s still sitting there, even though my little sister Sara is now in her thirties and has become a professional baker.  Still.  The mental note, like a long-forgotten post-it, is still hanging out there.  Maybe it feels like regret, a bit.

ANYWAY.  There you go.  Thanks for sticking around through all this senseless nostalgia:  here’s the link to the recipe I used today to make these one-pan brownies for Shabbos.