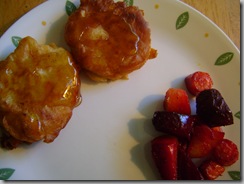 Ugh… noticed as I was mixing up the corn fritter batter for tonight’s Vegan Vursday that it may not contain milk, but DOES contain three eggs (I tripled the recipe because we like corn fritters a LOT).

Apparently this vegan thing is not as easy as it sounds!

Too late to fix it for this week… so we are having roasted root veggies (beets, carrots, potatoes) alongside non-vegan egg-based corn fritters.

Elisheva objects to calling it “Vegan” anyway… she doesn’t mind eating non-meat, non-dairy food, just doesn’t want to give it a big fancy name.  To her, I think, vegan means unpalatable bland tofu-based food.  But maybe that’s a good thing.

Maybe the kids get used to a whole palette of delicious non-meat, non-egg, non-dairy-based foods, they will come to realize that responsible eating doesn’t have to be stodgy or tasteless.

Of course, it’s only one meal a week.  But still, one vegan meal, times six people, times 52 weeks a year.  If everybody did it, it would make a real difference – somehow.

POSTSCRIPT:  Okay, the fritters were not vegan.  But the roasted veggies were, and they were utterly out of this world.  I don’t rave about my food that often, and I mean it ALMOST literally.  Beets, carrots, potatoes, and one onion.  A little bit of olive oil, a sprinkle of salt, a sprinkle of garlic powder (I prefer fresh, but that’s not an option right now unless I buy Chinese… and no, I have no clue where the powdered stuff comes from).  Simple – and delicious!