And in other garden news…

… it’s starting.  Despite the colds.  Despite the winds.  Things are growing.  Here’s a quick roundup, because I’m supposed to be making supper right now.

Muscari (grape hyacinths, or, as we call them here, gray “pie-a-cinths”!) 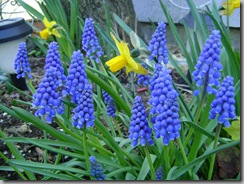 Arabis (wall cress).  I’m loving the solid, thick carpet of white they’re providing.  Bought a flat of these on clearance last year, almost dead and dried out.  I will look for more this year, because what a delight!  (They say you should photograph your garden in the morning because the afternoon sun is too glary.  They’re right.) 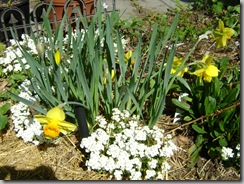 Garlic.  Two varieties, I forget which, purchased at Seedy Saturday-on-a-Sunday.  Now growing in pots.  You can JUST see the green starting to peek out here! 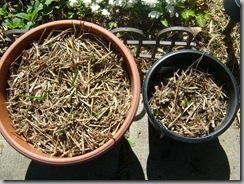 Humulus lupulus “Aureus.”  (golden hops vine)  This climber, now in its third season here, has gone utterly feral and is popping up all over the bed, as seen here where it is in the middle of some Shasta daisies and bee balm.  I don’t mind it popping up except that it has nowhere to climb, being so far from the trellis.  I am trying to transplant them to places that make sense. 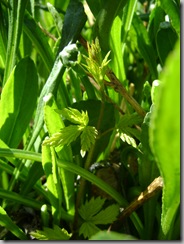 Volunteer Violets.  None of those scary pansy faces here! 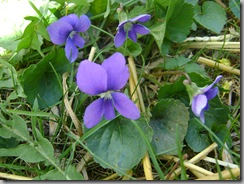 Basil.  I bought a basil and was keeping it at the front of the house, but on Monday, Naomi said, “let’s plant it!”  So I brought it out to the SFG bed and pulled some straw around so it wouldn’t perish in this week’s cold and winds.  Here’s hoping! 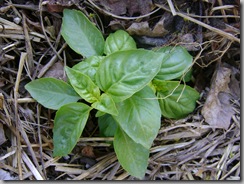 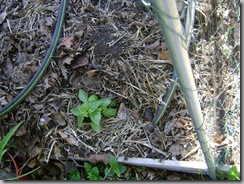 And finally, Boy with Cast and Phone.  It was my mother, inviting us for lunch the first day of Shavuos. 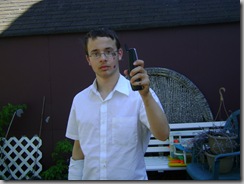 Of course, lacking social skills, as always, my knee-jerk response was, “well, I guess we have to eat somewhere.”  Not exactly the delighted reaction she was hoping for.  Of course, having known me for 40 years, you’d think she’d know by now what a dummy I am… but anyway, the reason I was less than thrilled is because Ted & YM will have been up all night and are sure to be exhausted.  Going out for lunch seemed like not so much to look forward to because of that.

Still – I should have been more delighted.  One less meal I’ll have to cook for!