In my usual impulsive gardening  strategy, I amassed a veritable collection of artemisias last year (the English name is Wormwood, but let’s just forget that ugly old thing).  I am drawn to the silveriness of them, and decided to just stick a bunch in the ground and see which survived.

Here they all are, coming back again this year. 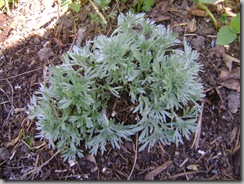 It’s already reached nearly the size it was at the end of the season last year.  I actually planted this rather late in the season, inspired by my mother-in-law in Calgary.  Apparently, it is vigorous, but not a thug.  It doesn’t seem to be growing anywhere else but in this neat, furry mound.

As opposed to its nearby neighbour… Artemisia “Silver King”: 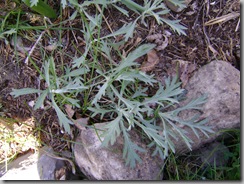 This seems to be spreading its wings nicely and popping up all over the place in the front bed.  Unfortunately, it isn’t really doing much ground-covering while it’s there.  I think I will only keep it if it does a decent job of covering the soil, because otherwise, that area will just look like a mess.  I’ll see how well it fills out during this season.

Then there is Artemisia “Silver Brocade” (accompanied by foundation-bed faux-stone froggie).  Half-forgot I planted this one, I suspect it’s the same species as the mysterious “Dusty Miller” my mother bought which just keeps on coming back.  In garden centres, Dusty Miller is usually the English name for Senecio cineraria, a frilly, thick-leaved silvery thing that is an annual here.  You buy it in flats, pop a thousand of them around your garden and throw them out in the fall.  The one in my mother’s garden which keeps coming back is most likely this Artemisia, which was a VERY late addition on sale last fall.  Doesn’t look like much, but there are a few plants and I really hope it fills in, too.  I think it would look very nice among the coleus. 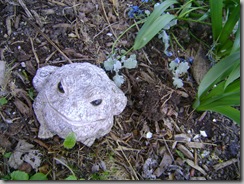 Finally, the one I thought would be my favourite, if only for the romantic-sounding name:  Artemisia “Powys Castle.”  Some people spell it Powis, but as far as I’m concerned, they’re just cowards, or Americans.  I was hoping it would take off there because it is a little more casual, or natural-looking, and less ball-like, than Silver Mound.

It has definitely spread, and there are lots and lots of tiny ones coming up, but they are just that:  tiny.  Here’s the biggest one, and you can see it is very much dwarfed by the irises behind it.  This one is smaller than the palm of my hand. 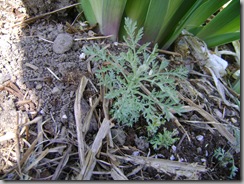 Good thing our city councillor’s Free Compost Days are coming up.  Not that I know anymore whether it’s safe to use city compost.