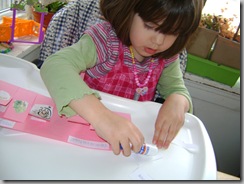 Further to my post last week about our first lapbook, here it is, with Naomi steadily working away.

It has been a fun project with lots of fascinating bits and pieces and I think she’s very impressed with the results. 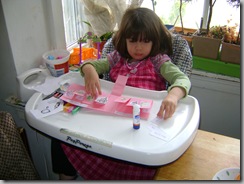 The piece she’s working on here is a “can we eat it on Pesach?” lift-the-flaps “game” that actually was not included in my original plan. But I thought it would be terribly remiss to leave out the whole stuff-we-eat-and-don’t-eat item from the folder, so even though it’s a bit crowded – slash – cluttered in the folder right now, I’m satisfied with everything that I’ve included.

You can see it a little closer here: I folded the page and created the flaps. She chose four YES and four NO foods from a whole sheet of food clip art (she used the rest for her other projects), glued them on the tops of the flaps, and then pasted YES and NO cut-outs underneath.

I have to say: the Dollarama glue sticks are a bit stinky. It’s a fruity smell, but not in a good way. In a bathroom kind of way. Ugh. But they’re 4 for $1 – so they’d better not be terribly toxic. And they are WAY better than any other kind of glue for a project like this because they dry almost instantly. Wish they’d had glue sticks when I was a kid!