Much too late for seeds, I know, I know

…But I’m a sucker, and I saw a mixed-seed packet at Plant World this morning and decided, why the heck not?  With bottom heat, I hope these will sprout quickly and grow fast.  I can always hope, right?

I also bought a cell-pack (79 cents) because, snapped in half, it fits in the square Jiffy 5 x 5 greenhouses I have been using.  I have decided to avoid peat pucks because they are SO hard to keep watered, and I’ve also installed self-watering mats under the plants I do have in pucks.

So half of the cell pack in a square greenhouse tray holds 24 plants.   I decided to use 12 for the new coleus seeds and half to transplant the “Black Dragon” coleus seedlings, which are getting too crowded in their peat pucks (and are too valuable to thin by snipping).

Just noticed, by the way, looking back, I sowed these Black Dragon seeds just a bit less than a month ago, on February 14th.  So this is what they look like at ALMOST one month.  Not bad… 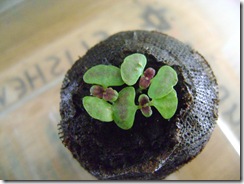 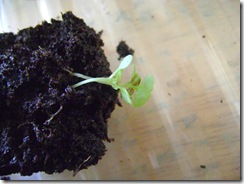 To replant these, I tore off the wrapping and split each puck, then untangled the individual roots, if necessary – so tiny!  Then I stuck them individually in cells (in some cases, I put two or three small ones in a single cell).  Here’s my favourite plant so far! 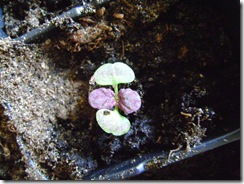 The colour got washed out in this shot, but it is nice and dark and the first true leaves already have a bit of their distinctive crinkled edge.

The soil I stuck the seedlings into is regular WalMart generic potting soil, but I did sprinkle a couple of teaspoons of name-brand cactus mix on top of each cell in an effort to keep the top of the soil dry and prevent fungus around the tiny stems.

In the remaining twelve cells, I seeded the coleus mix (“T&M Prize Strain Improved Mixed”).  There are still quite a few left over in the packet, but I didn’t want to have too many plants.  With a seed mix, though, you want the freedom to cull the ones that don’t look all that terrific, so I did seed generously.

Looking at this picture, I realized I forgot to add cactus mix to the “seed-only” cells.  They are in a high-quality seed-starting mix, though, so I’m hopeful that will work well enough. 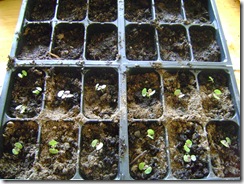 To take care of watering, the entire cell pack tray is “sub-irrigated” with a section of Lee Valley Root Barrier Watering Mat, cut to fit the bottom of the 5 x 5 Jiffy Greenhouse, with a “tail” sticking into a nearby dish of water.  I hope it works! 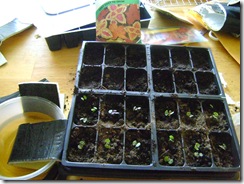 The water shown here is actually chamomile tea, which I use for all seedlings since reading a rumour that chamomile fights fungus.  I don’t want to say anything just yet, but I didn’t have a single seedling damp-off last year when I first started using it (2009).  I add four tea bags (no-name chamomile tea – about $2 for a box) to a big plastic pitcher of boiling water. 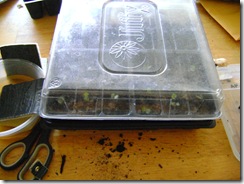 Finally, I taped a cover over the whole thing and transported it gently downstairs to the kitchen counter where it will sit on the heat mat, under lights, until the coleus sprout.  The packet says 10-20 days, but the last time I had germination in under a week with bottom heat.