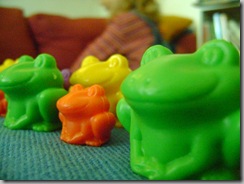 Bought these pattern cards a while ago to use with our math frogs, but haven’t gotten around to hauling them out until now.  Naomi has shown less than zero interest in them as they’ve sat on the shelf… but now that I brought them out, as usual, she got sucked in and found herself having a good time. 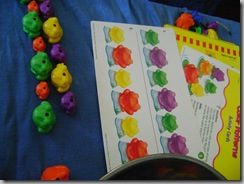 We only did the first two cards:  basic two-colour alternating patterns, then ones with the size alternating as well.  The froggies shown here are not supposed to match the ones on the card shown, by the way.  When she finished that card, I let her do a pattern of her own, and that’s what she came up with.

The cards are very simple to use, and I like the fact that the backs have black and white outlines of frogs that I can photocopy for her to colour in… to continue the exercise into two dimensions, if we want.  I’m bringing two along with us for her to do with my mother while I’m in Gavriel Zev’s dance class with him this afternoon.  We haven’t done ANY math-related “bookwork” yet, so this is a first for us.   We’ll see how it goes!

(p.s.  I am so happy to have a printer that photocopies…)

He dumped out a bunch of dried oregano on the table today, and she’s been “cooking” with it all morning.  She scooped it into a dish and added some water, and she’s been stirring it around from time to time and insisting we have to eat it.  Today is lasagna day, so perhaps I will add a bit more oregano than usual…