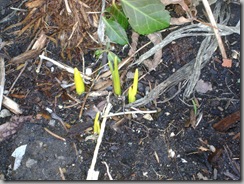 In years like this year, on days like today, I walk around awed (odd?) by the synchronicity:  such an early spring – and look how “early” Pesach is coming around!  And I marvel at the eternal wonder and wisdom of the Jewish calendar, compiled thousands of years ago, yet perpetually relevant, perpetually accurate…

Well, I can go on and on until I am brought back to earth with a catastrophic THUD, with the memory of Pesach seders celebrated in the middle of blizzards; the seder where the retelling of the plagues is accompanied by actual hailstones, falling, outside the house.

I’m also brought back to reality by the thought of other places:  places where the land has already reached searingly high temperatures and others, like my mother-in-law’s garden in Calgary, where spring is probably still two months away.

We were reading a Hebrew book about seasons and in the midst of unfamiliar-looking flowers and greenery, I spotted a familiar face:  the נרקיס (nar-KEECE), an ordinary daffodil.  Out of season:  it was listed as a winter flower.  (there’s also, apparently, an Israeli singer named Lior Narkis; does he not realize how Euro-pop trashy that open shirt button is?)

Seeing Israeli daffodils made me happy, but also made me think about how closely I associate this weather, this flower, with Pesach.  How I take it for granted and, when the weather is like this, assume it is all a message straight to me from Hashem.  Booming voice:  “SUNSHINE… DAFFODILS… MATZAH.”

Walking outside today, Naomi actually exclaimed:  “Mommy, come outside!  It smells like sweet potatoes!”  When she said “it smells” I was expecting a cliché, but of course, when someone is new, they don’t know the clichés yet, so you get something absolutely fresh and new – and TRUE.  I did smell… and it did.  Spring smelled like sweet potatoes today.

Seasons.  And Torah.  And stuff.

Of course, the Torah is perpetually relevant, the ancient Jewish calendar is a wise and wonderful token of our partnership with Hashem in planning the seasons of our celebration.

And Pesach always does manage to come in the spring… but it’s sometimes and in some places a cooler spring, or warmer (or searingly hot), and I guess it has little to do with Pesach itself or the calendar.

But it sure is nice right now.  I guess that’s all I’m saying.