Everybody knows how easy it is to propagate coleus:  take a section of stem and stick it in water.  A few weeks later when it has a bit of root action going on, stick it in dirt and waah-la:  a new plant.

Which is all well and good, but what if all you have of the coleus in question is a leaf?  Some plants, like African Violets (I think) and perhaps other gesneriads, a word I’m throwing in here simply because I can (and yes, it is a real word), are indeed propagated from leaf cuttings, which is basically a leaf, stuck in soil or some other medium.

Anyway, I had four coleus leaves hanging around last Tuesday, and figured what the heck.  I sliced off 1/3 of the leaves, and stuck them in some good-quality cactus soil, which I figured was nice and sandy; a good balance of moisture and dryness so they don’t rot.  Stuck it all in a take-out container, and threw on the lid for humidity. 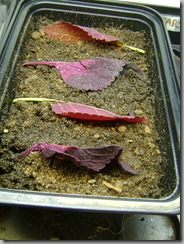 I’m sure I did it all wrong.  Since then, I’ve checked and various things say to remove the main rib of the leaf, cut up the leaf a bit so it will be wounded and root while it’s healing… whatever.  This was four dead leaves, basically compost already, so I really had nothing to lose but my dignity.

Anyway, here’s what they looked like a week ago.  FLOP.  Face-down on the soil.

And here, below, is what they look like today.  More upright, for sure; even a little perky.  I promise, I haven’t touched them or propped them up for photo-taking purposes! 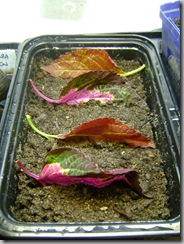 Of course, this could mean that they are thriving and will eventually exhibit their prolific coleus tendencies and root successfully… OR it could just mean that in the closed humid environment of the take-out container, they haven’t been able to lose their moisture to transpiration as leaves will when they’re just lying on the ground.

But meanwhile, it’s an experiment, and maybe we will all learn something new about propagating coleus!