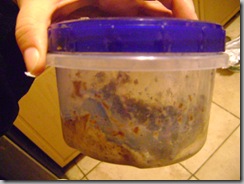 No, this is not the can of worms in question.

This was found in an inspection of the fridge last night.  At the back of the fridge.  The VERY back.  We think it may be charoses.

No, the can of worms is suggesting to my mother that I might, at some point, want to change my name.

Dumb.  I should never have used the word CHANGE.  I would never take away any of the names I have, names I know were given with care, love and good intentions.

No, I have been thinking for a long time that I should ADD a Hebrew name, one that I could actually use and be known by.  For a while, I thought maybe Yocheved or another “J” name, but I don’t love that name and it’s hard to pronounce.

I definitely still like the name “Jay,” but it’s perhaps too ambiguous, gender-wise.  And if we’re looking to end up in Israel, perhaps I need something more Hebrew-ish.

It’s actually kind of fun… making up names is one of the best parts of pregnancy, and now I get to try it out even while NOT pregnant.  I do have a name in  mind right now.

Anyway, can of worms it definitely is… even though I have done my best to take back that word CHANGE.  Here’s the way I tried to word it, in an email:

“Catholic children have a ceremony where they take on an "extra" name at the time they are confirmed, around 9 or 10.  I think that is a lovely thing, and it doesn't seem to traumatize their parents.  Sometimes they make it legal, sometimes not.  That was more the sort of thing I had in mind.

Anyway, I'm not losing anything or changing anything.  Just mulling about ways that I can be known that will be just as meaningful to me as my current names are to those who named me.”