Another first: buy Ontario, save the world… maybe! 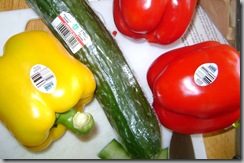 But I know there’s a downside to local… as Ted pointed out a while ago, being able to produce these things locally (in March!) does NOT mean we are self-sufficient.

What it means is that we are still utterly dependent on gas and electricity.  Only instead of using them to ship the produce from Mexico, we’re using them to heat greenhouses through most of the winter.  (and light, through shorter winter days?)

Ted has also pointed out – thanks, Ted! – from his reading that there may be greater efficiencies in distribution when buying produce from far away that may make up some of the resource cost of the actual shipping.

Still.  There are still some pluses, even without going into the impossible math of which uses LESS gas, fewer resources, etc.

Growing locally, in theory, means that you can get higher-quality produce, produce which is raised for its flavour and freshness rather than for its “keeping power” in the back of a refrigerated truck.

And potentially, there’s less “wiggle room” in the organic certification, if you choose organic, local supervision agencies being theoretically more reputable and accountable than those beyond arms’ length in China or whatnot.  Not that I necessarily buy organic.  For whatever reason, local is more important to me than organic, in most cases (not potatoes).

And plus… and plus.  The more demand there is for Ontario produce, the less Ontario farmland will be converted to townhouses, condos, subdivisions and those great big huge plazas (the ones with the Michael’s store, the mega Winners, jumbo-sized LCBO, extra-large Shoe Company et al) that make me feel like I’m living in some kind of city of giants… with that mega parking lot to match, stretching out for acres in front of the shops.

So I demand it.

I don’t necessarily feel the same way about buying Canadian, by the way.  The Okanagan valley is farther than many places in the U.S.; just because an apple is from Canada doesn’t mean it’s in any way “local.”  Shipping across this country is a hard, gruelling thing for much of the year that may cost nearly as much as shipping across an ocean, or from South America.

But then, that’s that impossible math again, and I’m just not going to go there.