Wet and… NOT dead! 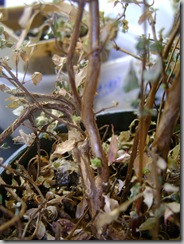 I bought this fuchsia at the Toronto Plant Society sale last year.  It’s a miniature, Encliandra Fuchsia… its name will come back to me or you can search past posts for fuchsia if you’re crazy about them, too.  (last year was my Summer of Fuchsia Madness, but I still love them quite a bit!)

Anyway, they have an expression in emergency medicine, or at least, on the show ER, on which my sum total of ER knowledge is based (okay, also a bit on Grey’s Anatomy and House; these are the only 3 shows I watch these days)… the expression is:  “you’re not dead until you’re WARM and dead.”

Because apparently people are often brought in frozen and soggy and the first priority is warming them to normal body temperature, at which point often miracles happen and presumed corpses sit up and start speaking.

Part of why I fell in love with fuchsias, besides the fact that they all (single, double, upright, multicolour, whatever) manage to look so endearingly ridiculous is that they are perennials, but so many gardeners here just threw them away.  I resolved not to throw it

Anyway, mea culpa, despite my love, I neglected this fuchsia a great deal through last fall and the first part of this winter until I moved the coleus down to the greenhouse, by which point it was a collection of brittle, crispy leaves and sticks that used to be a fuchsia.  It flowered rather frantically in November, perhaps to get my attention, and then settled in to die from inconsistent watering.

Hence my new expression:  “it’s not dead until it’s WET and dead.”  And since I cut back a lot of truly dead stuff and started watering this plant regularly, a couple of weeks ago, it has indeed begun bouncing back.  It is not sitting up and speaking yet, but as you can see in this picture, it is valiantly producing a few new leaf buds on the central stems.

Very brave, and I promise to reward its faith in me with better care in the future.