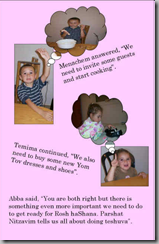 I hope I didn’t post about this before… but I’m getting old, so bear with me if I have already.

I’ve been searching for a long time for GOOD English-language parsha resources for young children, partly for my own kids and partly for this weekly Shabbos party I’ve been trying unsuccessfully to get off the ground for a few weeks (how do you say “discouraged” in Hebrew?).

Finally, a couple of weeks ago, discovered a site called Torat Imecha (which used to be the name of a ladies’ parsha sheet) that offers a series of little 8-page “books” on each parsha.

The booklets are perfectly geared to the 2-5 year-old crowd, with colour photos (there’s also a black and white version) and text that puts everyday family situations any kid can relate to into the context of the actions and intentions of Hashem and B’nei Yisrael in the Torah.

For example, in Parshas Pinchas, a girl doesn’t want to go to preschool and leave her dolls behind; just as Moshe didn’t want to leave Bnei Yisrael behind without a leader.   (the girl chooses her brother Noam; Moshe chose Yehoshua, and the rest is history)

Other than certain Sefardi terms (“Beit Hamikdash”), I have not found anything in these booklets that I could not read to my kids verbatim.   The illustrations are cute and the text is straightforward and easy to read; the English is clear and avoids unbearable cutesiness and frumminess (“listen, kinderlach…”).

Naomi especially likes the fact that the girl is named Temima; she has a friend with that name and it’s not a very common one here.   And the hashkafa (religious outlook) is very much in line with our own, though since this is geared towards toddlers and preschoolers, that’s probably not a big issue.

I’ve only seen a few so far, but I was so exhilerated by the two samples at the author’s site that I decided to splurge and spend $5 (US, via PayPal) for a weekly email subscription that covers the entire book of Shemos (Shemot).  No idea what we’ll do after that, but in the meantime, our second one just arrived via email and it’s great.

For now, the search is over…