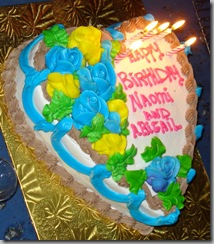 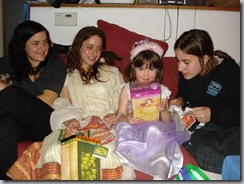 Here they are!  My birthday sister and my birthday daughter.  Amazing.  Naomi’s birthday is usually more in between Sara’s and Abigail’s, but this year, they’re only 2 days apart.  Next year, it will be more like a few weeks, because it’s a leap year on the Jewish calendar.

In this picture, Naomi is holding a much-coveted Barbie doll… now one of three (eek) in her brand-new collection.  She actually gasped and hugged the first one in amazement.  Numbers two and three, not so much.  Honestly, I think maybe she only needed one.  But now she owns three and a little closet to keep the clothes in.  Eek, and eek again.

So our nummies is officially Over.

Naomi had her last nummies on Thursday night at bedtime.  Friday morning when she woke up was not a big deal, because she hadn’t had it in the mornings for a while.

Friday was a busy day and she didn’t need a nap.  Phew!  Friday night at bedtime was fine because it was late and she was exhausted.

Shabbos at night I was home alone with the two littles and managed to nummy Gavriel Zev while reading a book to distract Naomi Rivka.  It worked.  She slept fine.

Five is definitely Old Enough.  There are folks who would have said one is old enough.  With eyes rolling:  “how long are you planning to nurse her?”  Well, now they can move on to Gavriel Zev.  After all, he’s almost three and still having nummies:  scandalous!

Naomi’s only asked for it once since Thursday, and then kind of jokingly.  I think I’ll let her touch as much as she wants, but so far she hasn’t tried.  She used to do it sometimes in the morning when she woke up, knowing she couldn’t have any but wanting to be close anyway.

So here’s my old ticker:

But it’s not true anymore, so I’m setting up a new one.  I don’t know whether to keep the date – I have indeed been nursing continuously for 5 years and one week.  But Gavriel Zev’s nummies only started when he was born.  Hmm…

I don’t like how it starts at Naomi’s birth, but feel I deserve some credit for five years… FIVE years!!!  That sure isn’t nothing.

Another beautiful shot of the birthday princess in full regalia: 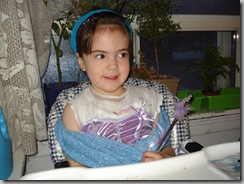