See?  I’ve been good!  I haven’t updated since last Tuesday, even though I have tons of progress to report.

So with no apologies, I offer this brief roundup of… how’s it growing???

First, the teeny baby coleus (Wizard Sunset), after almost two weeks above the soil, now look like this: 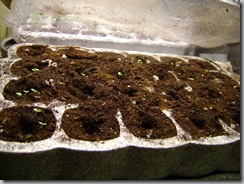 Not much bigger.  But there are more of them.  Bottom heat would have helped immensely, as I now know from the Black Dragon coleus I sowed at the same time as the herb seeds, a week ago last Sunday, which have all popped their heads up nicely.  They’re the back four Jiffy pucks in this tray: 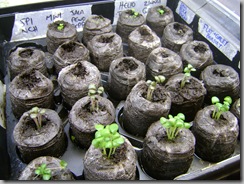 After the coleus, the other four rows are (back to front) flat parsley (kind of rooting), curly parsley (starting to sprout), Red Rubin basil (growing nicely), and Genovese basil (growing prodigiously in the front row). 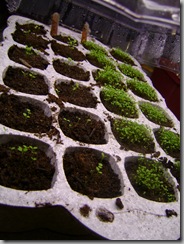 Finally, but not leastily, the annual flowers… the petunias and lobelia that were SO tiny when I posted just last Tuesday have filled in tremendously, as you can see.

For the petunia, there are a respectable 3-5 seedlings in each cell.  The lobelia are such tiny seeds that there are dozens and dozens in each cell, but they are easy to snip with a tiny pair of nail scissors.  I thin them out a few times until there are just a few in each cell, with plenty of space for everybody.