Homeschool math & more for toddlers who are two 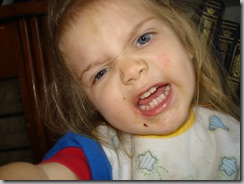 I’m thinking about toddlers today because a friend, whose daughter is just a few months younger than GZ, mentioned that her husband was hoping she’d start doing more math.

If you’ve read here before at all, you’ll know I love math, teaching math, math concepts and the idea of sharing math with my kids.  (just don’t me started about the  missing Life of Fred Algebra book… grrr…)

But I have two thoughts about doing math with 2-year-olds.  One:  two-year-olds are very young.  And two:  every parent has different areas of interest that they feel is MOST important for their kid to learn.  For her husband, clearly, it’s math.  For my friend, it could be something completely different… one or more subjects she loves and dearly hopes to pass on to their daughter.  Neither is more important, especially at that age.

The best way to learn math is integrated with other subjects.  So I basically suggested that “as long as you are talking about colours, shapes, numbers, quantities and (relative) sizes of anything whatsoever, wherever you happen to be, she is learning math far more DEEPLY than she would at a desk.  You'd have to lock her in a sensory-deprivation box (you do have one of those in the basement, right?  Invaluable parenting tool!) for her NOT to learn age-appropriate math skills at her age.”

Because two-year-olds really are at the Junior Scientist stage.  Add measuring cups and spoons to bubbly water, lentils (ours are split peas) or sand and she WILL learn math.

I don’t talk much about homeschooling GZ, because I don’t like to think of it that way.  Naomi Rivka wasn’t a homeschooler at that age – she was just a toddler.  And it annoys me to no end to show up at a “homeschooling” event to find basically a room full of two- and three-year-olds.  That is NOT homeschooling.  That is just childhood.

Having gotten that off my chest, I will say that Gavriel Zev definitely gets more “schooling” than she did when she was his age, and is far more aware of many of the “school-type” concepts we cover than she was.

Most of it can’t be helped.  “What day is it today?” is his favourite question this week (a couple of weeks ago it was “How old are you?”).  He loves changing the days of the week, the weather poster, etc.

Then there are formal “curriculum”-type activities.

For math, Naomi Rivka is strictly manipulatives-based at the moment, with zero writing component.  We haven’t hauled out the split peas in a long time, but try to do at least half an hour of Monday Math (half an hour per week… hmm, that’s not much) and generally haul out either the Cuisenaire rods or Funtastic frogs.  This week, on an impulse, I brought out my new baking scale and the kids had a great time arranging the frogs on the scale, with Naomi occasionally glancing at the numbers.  Gavriel Zev generally gets on the bandwagon and just does whatever she’s doing, on his own level.

For anything reading- and language-based, he’s usually right in on the action.  Sometimes, if we’re reading a longer fairytale (we’re in the middle of Hans Christian Anderson’s original Little Mermaid right now, which is VERY long), he’ll play quietly in the middle of the room while Naomi sits beside me on the sofa.

When she’s doing anything that involves writing, he’ll either play with his own stuff, or haul out some crayons or bingo-dabber “dot-dot” markers to make his own picture.  Again, at his own level, and he usually loses interest pretty quickly.  I haven’t seen much improvement in his drawing skills since he first started, and he gets discouraged very easily when his pictures don’t look like anything.  He is hesitant about drawing lines with a marker, but happy enough with the dot-dot marker, or with watercolours.  (both of them are loving the watercolours this winter!)

So does all of this mean he’s having this brilliant head start and will end up light years ahead of her?  I doubt it.  Does it mean I won’t have to go through things as systematically with him as I am with her?  Maybe.

Now that we’re finished the alef-bais, I don’t relish the idea of doing it all over again with him, but… I figure we should try it next September anyway.  It will have been a year, so Naomi will probably not remember well, and even if she does, we’ll be tackling it on a whole new level.  And meanwhile, Gavriel Zev will be almost three, and probably ready to actually learn the letters for himself.

Plus, I will already have all the songs and worksheets that I put together this year!

Me, at naptime today:  “What do you want to be when you grow up?”

Naomi Rivka:  “I want to help kids who aren’t homeschooled.”

“For what ages of children?”