Traditional hamentashen (recipe here – yes, I did give this recipe only 3 stars for its extreme oiliness, but it turns out very sturdy hamentashen, which is my main criterion for packing..) 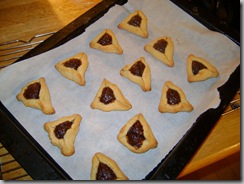 But, in this year’s big Purim reveal:  in a fit of inspiration, I decided the gingerbread hamentashen should be filled not with pumpkin, as I’d originally planned (I even had the tin of filling right here, waiting, but with CHOCOLATE.  I found this great filling recipe that is almost a brownie, but still gooey enough to have the proper “filling-like” consistency.

Elisheva, who does not like gingerbread very much (according to my review of the gingerbread recipe, last year she called it “medicine-y”), has officially proclaimed these delicious.  Chocolate and gingerbread… I didn’t think it could work, but my sister Sara suggested a few weeks ago that this was not such an unheard-of thing.  And then last night it came to me, and here they are.

So thank you, Sara.  They truly are delicious, and we will try to save you one!

Here are the circles, waiting to be pinched shut; looks like chocolate on chocolate, but they’re not… 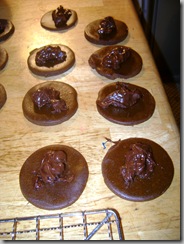 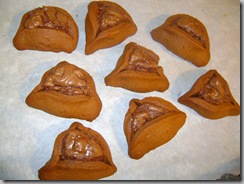 And here is the inside.  Very gooey in this picture because it was still warm, but I just had one now – scientifically testing them for deliciousness – and they are indeed still lovely. 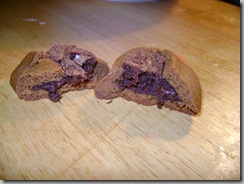 So, SO happy with this discovery!!!