Can it be done?

Inspired by Ima on the Bima, this intrepid culinary explorer first inquired (earlier this afternoon), then embarked on a journey of discovery; a journey of… truth.   A journey of cookies.

Luckily, I  had a batch of my trusty Recipezaar gingerbread dough still sitting in the fridge from Sunday just waiting for an application.  Unluckily, I didn’t have the pumpkin-pie filling that I thought would be so perfect tucked inside a gingery nest.

Rather than wait (which I will foreshadow the experiment’s results by suggesting might have been prudent), I decided to use CHERRY pie filling… well.  I doctored up the filling with a bit of flour to stiffen it up, and scooped it into a bunch of circles cut out from the gingerbread dough (while Naomi Rivka was decorating some gingerbread men and Gavriel Zev was screaming).

Here’s what I got: 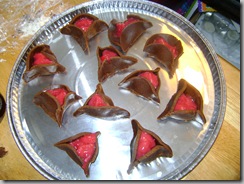 Nice.  I like the contrast between the bright-red and the dark dough.  Wish it was chocolate, actually… but it wasn’t.  The dough was on the stiff and dry side, and cracked a lot when I folded them, but none of the hamentashen leaked when I baked them.

Most did open up, however, a problem which could be solved with a bit of egg wash over the entire inside of the hamentash.   I wanted to do that this time, but discovered we were totally out of eggs.  Blah.

Still, they actually looked okay out of the oven: 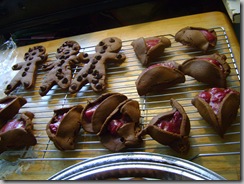 Now for the moment of truth:  tasting and judgment.

And they’re actually OKAY.  But not great.  Cherry and ginger?  Not a great combo.  They’re actually crying out for pumpkin, which I  new all along.  Despite having the same last name (“pie filling”), Cherry Pie Filling doesn’t fill in where Pumpkin is called for.  Doh!  I knew that.  I should have waited ‘till after Ted goes grocery shopping tonight… but I didn’t.

My father used to have an expression, when something my mother made came out pretty bad (rare!)… he’d say, “you don’t have to make this for me again.”  These were not THAT bad.  Will I make them again?

Sure!  With pumpkin filling this time.  So I’m pretty much back where I started.

The experiment proved that… well, it proved that I still want to try gingerbread hamentashen with a pumpkin filling.  It did also demonstrate that it might be a challenge using this trusty (and sturdy!) gingerbread dough as a hamentash… but with a bit more moisture, and perhaps a bit of egg wash, the hamentashen might just work out.

Meanwhile, we have about eight cherry-ginger hamentashen to finish off… want one?