Hum along to that Beatles song; how does it go?  “I fed the worms today; oh, boy…”

So!  With much apprehension (quite warranted, given that I have not even looked at the worms in the worm bin downstairs since maybe November), I armed myself today to face the worm bin. 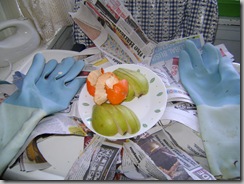 As with most things, the reality was not as scary as I had feared.  Yes, the box is full of material that is mostly  broken down and requires sorting.  But it can probably wait ‘till spring. 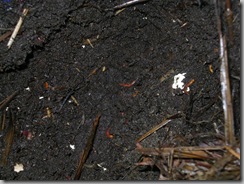 The box is definitely not running optimally anymore, but then, these conditions have been far from optimal.  There are not as many worms as there should be, and the range of sizes is not as great as it should be (in a happy worm bin, you should see worms of all different sizes, ie ages).

But there are still worms.  Hundreds and hundreds of them, I’m sure.  All you need is a few to ramp  back up to full operation in a relatively short period of time.

So basically, what I did is shove all the material to one side, dump the fruits on the now-cleared left side, and covered it all up with the shredded newspaper.  I should have moistened the newspaper, and I may go back down and do it at some point later on today. 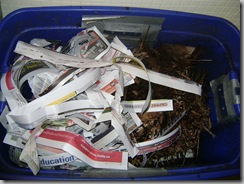 At least it LOOKS nice and neat (though it takes up half the bathroom floor downstairs, and should have a pan underneath to catch drips) (it has never dripped, that I know of, since I got it almost a year ago). 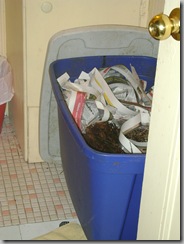 I cannot tell you what a relief it is to get this dreaded task over with.  And it really was NO BIG DEAL.

Goodbye from all my happy worms!