The coleus of strangers 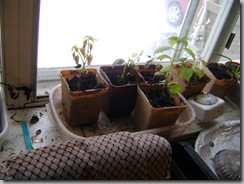 Low, low, low, low, low:  With temps here thudding down to 16 degrees every midafternoon (probably lower on a sunny windowsill), many of the coleus are officially Not Making It.  These are a few of the least pathetic plants, and you can see (the soil is fully moist) but they are just not making it. 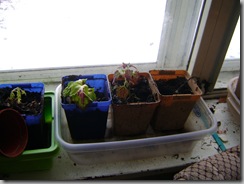 They were left too long in the water, it’s too cold to root well, and there’s some kind of mega-damping-off fungus running rampant that is sucking the life out of their stems and causing massive keeling over.

Waah!  My coleus dreams for Spring 2010 have been shattered.

Nice people, that’s what!  Or at least, one nice person… but that’s all you need, right?

A desperate coleus-seeking ad on Craigslist actually brought in a response from a coleus lover who works in a restaurant just a few blocks away from here.  Unfortunately, he doesn’t have a lot of the red shades I love, but he did offer me a huge piece of what looks like an indestructible White Wizard (by which I assume he means a “white” variant from the wizard mix) and a smaller piece of a Kong Red. 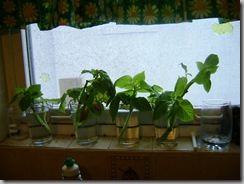 If the Kong Red doesn’t sport and get all weird, that one at least is red.  The white one, well, isn’t even white… it’s just plain green.  Green is lovely in a garden; don’t get me wrong.  And I love many of the greenish coleus varieties I’ve grown.  But frankly, green in a garden isn’t startling the way most coleus are.

The best moment, when you’re growing coleus, is when somebody spots one and does a double-take:  “what the heck is that thing???”  My mother did that last summer, once, when she spotted an extraordinarily weird specimen.  What a gratifying moment.

Anyway, nothing against green, it just kind of blends…

Hey, speaking of windowsills… I just realized as I was typing this that Ted didn’t plastic the front windows this year.  I wonder if that is making a difference to the survival rate of the coleus?