A wow risotto supper – under pressure! 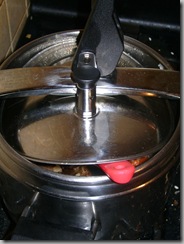 Why is this pressure cooker feeling giddy???

Doesn’t it look like one of those Disney animated teapots with the “tongue” hanging out and the cartoonish “nose” right  in the centre?

It’s probably just tipsy from all the delicious wine, and chicken soup, and other amazing ingredients that were featured in last night’s super-simple sausage risotto. 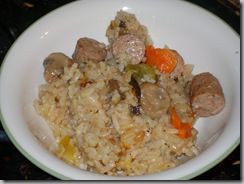 I added the soup, mushroom liquid, wine and water – four cups worth – after everything had a bit of a fry together, and then you just pressure-cook the life out of it.

I don’t know if it’s just my pressure cooker or the usual thing, but it does seem to take FOREVER to reach pressure – the point where it starts to whistle and the little safety mechanism pops up, and you can turn the burner down a bit (not too much, however, as then you lose pressure and have to turn it up again).

From the point when the pot reaches pressure, it takes 7 minutes to cook the arborio rice.  However, it’s not exactly a miracle since it maybe took 10 minutes to get to that point.

In any event, I don’t know if it’s the pressure cooking or what, but I wouldn’t do a single thing differently.  Wow.  Amazing.  And super-easy… no side dishes (or homemade bread) required!

And, by the way, a perfect meal for a chilly, lazy, winter evening…