But this place needs it.  I’ll be honest:  I have not been in the bathroom downstairs in weeks… because the way is totally blocked with bags and heaps of “send it to Value Village” stuff.  The playroom is practically inaccessible.  The stairs and slide, which would be very useful at this time of year, are similarly coated in junque.

The other meme is an ongoing project from the same site: 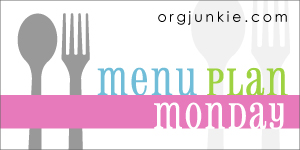 Yup, between now and tomorrow, I will put together a MENU PLAN of suppers for the entire coming week (leaving out Shabbos).  She says it’s okay to change things around, but I really like the idea of starting the week with a plan.  So now that I’m getting a sense of which are our “easy” days and “hard” days (ie Mondays, when I have my signing class, plus Ted’s late day, plus Thursdays because of my aerobics class, plus any day when I’m out with the kids every single minute)… I can theoretically plan around them to have the easy suppers on the hard days and vice-versa.