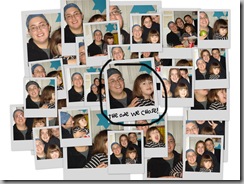 I often (maybe even tediously often; tiresomely often) say that my favourite kind of article to write is one with no interviews, no sources, no quotes… just my thoughts on a piece of paper.

Unfortunately, me being NOBODY, the number of publications willing to actually pay me for said thoughts is very, very low.

So I am very excited, disproportionately excited, that the Canadian Jewish News is publishing a piece of mine about homeschooling in next month’s “Education” supplement.  Not even as a regular part of the paper, but at least in a section where people interested in schools for their kids will be able to have a look at it.  Dunno if that’s a good thing or a bad thing, in terms of readership.  It certainly doesn’t affect the low amount I will be paid, which is the same low amount as I get paid for even the most complicated articles, with sources and interviews and whatnot.

But what it does mean is that, our family being the main focus of the article, my editor requested a photo of me and my daughter to accompany the article.  I assume she means dd2, aka Naomi Rivka, but in an attempt to get a picture just of me and Naomi, I had to swat away two other children who simply wanted to stick their fingers and faces in on any “semi-serious” picture Ted was trying to capture of me.  (Gavriel Zev couldn’t get in on the action merely because he was strapped into his highchair at the time.)

So the collage above is the result:  literally 29 photos of these crazy kids making faces, waggling fingers, distracting Naomi, sticking their heads into the frame… all with me trying to look semi-normal and writerly while attempting the ventriloquist (no lips) way of saying “get away from here… all of you!  Except Naomi!” 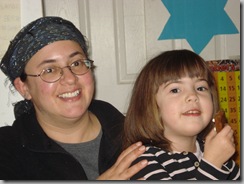 It didn’t work.  The very last picture, in the centre of the collage, was the best one, but not by much.  I think I look both chubby and deranged (only one of which could be repaired through diet and exercise).  And Naomi has her “sit-still” cookie-bribe rubbed all over her cheeks.

Oh – did I mention that after all these photos, I zoomed in and realized I had Joe Boo’s Cookoo’s wing sauce all over my face?  Luckily, the CJN is black and white.  Hopefully, people will just think I’m blushing, not smeary.

But I am happy that two “semi-educational” things were captured in the photo to make our homeschool legit:  the Magen David, one of two which have been taped to our basement door so long we don’t see them anymore, and the number chart.

That number chart, by the way?  At something like $3.99 from Scholar’s Choice, it has been the kids’ number-one favourite “school” supply.  They both stand and stare at it for long stretches of time, either counting, finding their ages, making up silly names for the numbers, transposing numbers, whatever.

Even Gavriel Zev will stand there and ask anybody coming into our house, “how old are you?” and expect you to show him “your” number.  Of course, he also asks, “how old are I? and “how old are Elisheva?”

Perhaps I should invest in a grammar chart next.