How do you say irony in Yiddish? 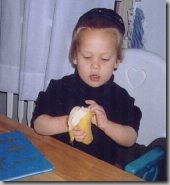 People say “dilemma” for just about any type of problem, and as I will tediously point out (and sometimes neglecting straightforward halachos of honouring parents, in certain people’s case) it’s not technically a dilemma unless it has two horns, or lemmas, each of which is an equally-weighted option, and the person is uncertain which lemma is the appropriate choice.

I realize this is an utterly sophomoric thing for me to point out, in the literal (“having some knowledge but not much”) sense – I don’t know enough about rhetoric to take the discussion much beyond this first-year-philosophy level.

But still.  Once you know something, you notice it.  Same with irony.  And I don’t know if this is ironic, but I  do know the topic of this post will be anticlimactic if you’ve read this far.

I love Yiddish, love the look of it (All those yud’s!  The kometz-alef!  Guaranteed to drive a pure Hebrew speaker crazy!), love the sound of it.

I have tried at various times in my life to learn it, speak it, read it, etc.  To my Auntie Sally, it’s unfathomable that I don’t just innately understand Yiddish.  I’m sure lots of people have a relative like this.  You assure them you don’t speak Yiddish, so they shift for a few words into English, a few words into Yinglish, and the rest of the lightning-speed conversation is pure, not-understood, Yiddish.

“Ich redst nisht Yiddish” is the phrase they teach you to tell people you don’t understand, but since many Yiddish-speakers are from the Old Country, they take your fluent grasp of this one phrase to mean that you DO speak Yiddish.

I was so excited to become frum because there are two groups of people who speak Yiddish – one very old and old-world, and one very young and frum, namely the Pre-1A class at Yesodei HaTorah.

But YM didn’t go into Pre-1A at Yesodei HaTorah.  Instead, after his very frum, very Yiddish, very wonderful kindergarten year at “Yesoidei” he went back to SK at the BJCC, and on to Grade 1 in our friendly not-so-local dati-tzioni day school.

That was for many reasons.  He wasn’t ready for a full-day, at-a-desk learning experience (is he yet, at 15?).  I didn’t love what I’d heard about the Pre-1A rebbe (though he was the same one we’d gone to during YM’s upsherin).  I couldn’t afford it, and couldn’t handle the shlep to daycare in the middle of my work day.

One of the things I deeply regretted was that he would never speak Yiddish.

But at the time I was also happy that he was getting a greater share of Zionism than he’d received in the previous school.  Yom HaAtzmaut was a nonentity, and many of the Hebrew songs (and concepts) I’d grown up with were gone from the curriculum there.

So I was moderately pleased and figured maybe the better Hebrew made up for the non-existent Yiddish.  Since I had to choose and everything.  And the Hebrew felt like a better fit for our family.  Why?  Are we not as Ashkenazi as the others?  What is so innately wonderful about Hebrew that we need to drop the thousand-year-old language my grandparents were born with?

(I know of only one school in town that tries to give time to both languages, and what it accomplishes linguistically does not make up for the lack of religious education)  (okay, maybe two schools TRY, but don’t get very far)

(and okay, I know what is wonderful about Hebrew, and no, Yiddish is not Lashon HaKodesh or anything, but for a largely Ashkenazi school to largely disregard Yiddish culture is, I feel, somewhat negligent)

Enough parentheses.  My time with you is drawing short because Gavriel Zev will wake up soon so I will zip ahead to the punchline.

YM’s rosh yeshiva addresses the kids almost ex clusively in Yiddish.  Apparently, he’s going to be YM’s rebbe next year.  He admits he only picks up about 75%, but that’s up from 50% at the beginning of the year.

Now, granted, it’s not the Yiddish of my grandparents.  What they spoke is what I think of as Polish everyday Yiddish.  What he’s learning is “yeshivish,” which contains so many Hebrew and Aramaic words, essentially mispronounced, that my grandparents and their generation would probably never have understood it.

But I do hope he’ll pick up enough to get by in a conversation, if he has to.  I honestly believe he will soak it up through his pores if he’s in a sink-or-swim setting.  I mean, it is his heritage, right?  On the other hand, there’s my Auntie Sally’s misplaced optimism in my own comprehension.  Now there’s a dilemma!

So I do think it’s ironic, (but to get back to where I started, feel free to suggest that it is not, in fact, irony), that after having spent so many years bemoaning the loss of Yiddish in my family, it may not actually be entirely lost.  25% lost, maybe, but that’s not bad… especially after so many years away.