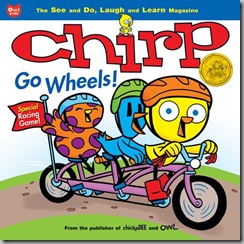 Back in May, we bought and ate a box of Reese Puffs Cereal – not a major sacrifice – in order to redeem a code for free books and/or magazines.  Naomi Rivka and I looked it over and chose a mini-subscription to Chirp Magazine.

Well, not so much.

In June, I finally got General Mills’ website to work and accept the code from the box.

By August, it still had not arrived.  Why?  General Mills lost our address!  Not to worry; they realized their computer had eaten all our information, and requested that I re-send it.

Annoyed beyond belief, I actually emailed Owl Publications, which produces Chirp and other magazines, directly to complain about the poor service and see what they could do about the problem.

However, in early September, somebody both emailed and phoned from General Mills and I confirmed our mailing address once again in person, heaved a sigh of relief, told Owl Publications not to worry and sat back to wait for the magazines to come.

So here’s the email I’m sending to the last General Mills customer-service person I heard from.  A little extreme, maybe… think I’ll hear back?

Further to our previous correspondence way back in August, it has now been EIGHT MONTHS since I initially tried to request the free 3-issue trial subscription of Chirp Magazine - something I initially thought would be a fairly simple matter.

Just to recap, the problems I've encountered since May of 2009, when we first bought the box of cereal and selected the magazine we wanted, have included:

- not being able to use your website to enter the code

- receiving a confirmation ("Jennifer, your book or magazine is on its way...You should receive your reward within 6 - 8 weeks!")... but no magazine

- emailing General Mills; another confirmation... but no magazine

- phone call from a General Mills representative in early September to ensure that our address was now on file and confirming that our magazines were on their way.

It's now four months later... the magazines have still not arrived.

This must be the cheapest, easiest promotion in the history of your company; simply promise magazines, then put customers through an incredible hassle (broken website, ignorant customer-service reps, lost databases) until they forget about the magazines altogether.

My daughter is going to be five soon, almost a full year older than she was when I first promised her the magazines.  I am not just bemused any longer.  I'm not just upset; I'm angry.  This is absolutely inexcusable.  If your company is going to make an offer, especially to children,  you must be prepared (technologically and otherwise) to follow through.

Please let me know when our first issue of three will be personally hand-delivered, with an apology, by a General Mills representative.  Or, if not, whether we can expect anything at all from your company, which is clearly incompetent to run promotions of this kind.  My address is below in case you have forgotten it once again.