Gaaaaah! I can’t! Cannot do it anymore!

I have to say it!  I can’t stop myself!  Last year, I made it ‘till February 4th, but a series of warm days this week have totally messed up my seasonal “navigation system,” and I have to HAVE TO shout it from the rooftops:

WINTER IS ALMOST OVER.

Okay, not technically true.  But as my sister Sara often says (yes, my sisters can be as tedious as me sometimes), there’s more summer in September than there is in June.  Yet we think of June as a summer month, and September as fall.  Ditto with winter.  We think of March as a spring month, but it really is mostly winter, more so than December.

What have I just proven?  I think I’ve just gone the other way and proven we have way more winter left to go.

But it’s not true.  Look, I’ll prove it to you!  Look at this chart, courtesy of Weather.com.  See that dip at the very beginning?  Minus THREE.  That’s the average high for a typical January day around here.   (Weather.com says that means 27 degrees, for those of you who don’t believe water freezes at zero like we do) 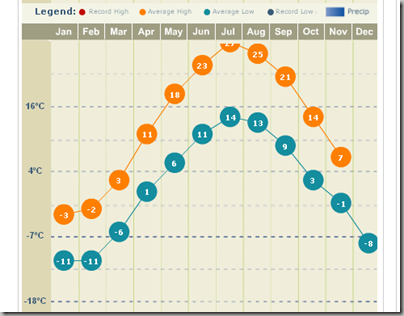 So anyway… if you zoom in a bit on the details, you’ll notice that ‘round about mid-January, we enter three weeks of minus-three’s in a row.   That’s where we are right now.

Then, on precisely February 9th, things start to turn around.  On February 8, the average high is –3.  On February 9th?  Minus-two.  After a week more of that, the temps go up by an average of ONE DEGREE every single week.

In honour of another tease of an above-zero day, I got the kids out to Laughlin and Cedarvale for a lovely two-hour walk.  Combination of playground fun and nature fun:  my favourite.  We admired seeds of all kinds, found sticks, poked puddles, with only one catastrophic slip-and-fall and head-bang on a particularly icy patch.

Luckily, there was a big-boy friend GZ was trying to impress, so he didn’t cry too much.

I know today was a tease.  I know next week is supposed to be colder.  I know we have to get through all those minus-threes and even (horrors!) minus-tens before we make it to the thaw.  And I also know – as someone so kindly pointed out last year – that with rising temps, precipitation goes up.

I know all that.  I know warm weather isn’t always better weather.  And I know that months can come in like lambs and go out like lions, or whatever they do.  It is always darkest before the dawn, right?

I don’t know what I’d do if I lived in Nunavut; I mean, I guess at some point, the weather must still turn around and start getting warmer, but “warmer” is all relative.  What I live for is the above-zero days in February and March, though even those are a tease for real spring.

Hey, maybe I’ll go order some petunias!  Here’s what I’ve chosen for this year:  Laura Bush Petunias.  No, they’re not “bush petunias.” For whatever reason, they are named after the former president’s wife.

The main reason I’ve picked them is that they are “old-fashioned” petunias, meaning THEY HAVE A SMELL.  I’m out of seed for the petunias I’ve grown the last couple of years, and besides, I would prefer a solid colour.  But my main criterion, and you’d know this if you’ve read any of my past petunias rhapsodies, was that they must SMELL NICE.  (here’s another past petunias rhapsody)

Petunias have been overbred commercially to get all kinds of desirable characteristics.  They must be bushy (not as in President Bushy), they must fill in gaps, they must be small, or big, or double or whatever… but very few people are breeding SMELLY petunias, which is exactly what I want.

Hence, the appeal of Laura Bush.  Pretty cheap and easily available; better order soon so they’re ready to start later on next month!!!