Bringin’ Home the Bakin’ (for Shabbos) 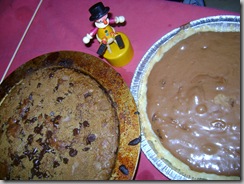 Trying out a new challah recipe, and also baking up another “new pareve banana cake,” along with a chocolate-mousse pie (with toasted pecans hidden inside).  I hope to also get an apple kugel made at some point in the next – gasp! – hour.

Elisheva came out to announce that she’d finished her dvar Torah and wanted to go for a walk.  A walk.  On a day that is –10 degrees outside at BEST.  I was instantly suspicious.  A voluntary walk in this weather always means somebody is up to no good:  smoking… or something else.

So it was Something Else.  It was a WiFi connection.  She finished her dvar Torah on her iPod Touch and she needed to walk around the neighbourhood until she found an open WiFi connection so she could email it to herself, then come home and print it.

Her iPod is a hand-me-down from boy-boy; it used to be broken, like for 6 months, but now it suddenly works again.

Anyway, it worked and she stomped back inside 5 minutes later complaining about winter in Canada, and how it was too cold to do any tidying outside.  Sheesh.  The tidying outside has become a priority because our neighbours (yes, these neighbours) have moved out and are hoping to fix up and sell their house.

I know I wouldn’t want to buy a house next to all our driveway junk, so in a fit of  niceness in which she gave us two room fans, I promised to tidy the outside, which I’d had in mind anyway after hearing a neighbourhood rumour that they were selling.

But apparently, today is too cold to tidy.

I have three precious green Muskoka chairs (in the US they’re called Adirondack chairs) that I have found at various curbs around the neighbourhood, and two are by the side of the house in  a nice comfy sitting arrangement.  I had some plants there over the summer as well.

Anyway, in yesterday’s huge winds, one of my precious chairs blew down to the curb… I noticed it when we got home, but was too busy climbing tables in my suddenly-nice neighbour’s garage fetching room fans to move it.

Until… serving milk to the littles for their lunch, I happened to glance outside and noticed the garbage truck at our curb, and the worker TOSSING THE MUSKOKA CHAIR INTO THE TRUCK!!!

I dropped the milk (literally, it turned out when I came back inside).

I ran in socks out to the curb and shouted “STOP!!!”

And rescued my chair, which is now back in the driveway where it belongs, sensibly weighted down by a heavy plant pot (which will probably crack over the winter because it was left outside, but that is another story for another day).