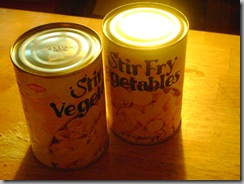 Two swollen cans of stir-fry vegetables.  Which you’ll be happy to know I refused to use for the massive oven-fried rice dish I put together for the neighbourhood Carlbach Shabbos potluck.

So YM asked if he could take them outside and “explode” them.  (I mentioned to him that a previous can had kind of whooshed when I opened it a couple of weeks ago.  Threw that one away, too, in case you’re curious.)

I said he could when he was finished all his erev Shabbos task list.  So here he is,  hard at work! 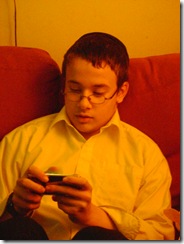 Finally, at the last minute, he leapt up, did some stuff, ran down and had a shower, then came up in his towel and undershirt to write his dvar Torah. 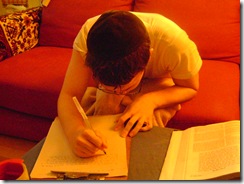 The cans were a disappointment.  Apparently, they didn’t explode, just kind of “whooshed.”  Which is what I expected, but I know boy-boy was hoping for more.

We had a nice Shabbos.  Sometimes, I really love this boy.  I love him in these pictures; relaxed and mellow… an iPod Touch will do that to you, I guess.

Today (tonight, 2 Shevat) is our anniversary:  six years today!  Yay!  The longest, most exhausting years of my life, but as Garrison Keillor might say, we are still married.