What the heck IS this stuff?!? 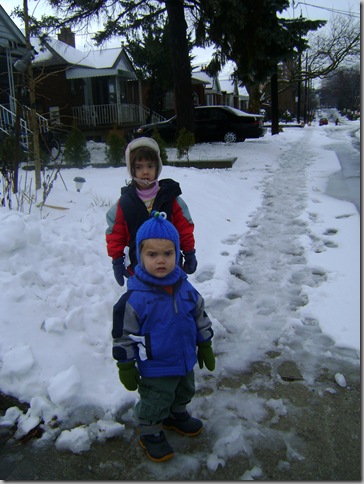 Gavriel Zev may look like a Boy With Boots in this picture, but they are Naomi Rivka’s   No boots, and they’re about three sizes too big (they’re a 9, I think he wears a 6).  Naomi’s are only two sizes too big; I bumped her up to the like-new Size 11 Cougars that I found at Value Village over the summer.

I took this as proof that I actually got the children outside today.  We were totally snowed-in feeling and at each other’s throats all morning.  I told Ted on the phone that he was going to come home and find a home empty but for our gnawed corpses.

I was totally bummed (no other word, no nicer word; sorry!) because I’d planned a really nice outing – slash – playdate with a couple of other mamas and had to cancel.  Blah.  I hate cancelling, for any reason, mostly because so many parents seem to do it at the drop of a hat.  “Sorry, she’s grouchy today; I think we’re going to stay home.”

I didn’t even want to cancel when I woke up feeling sick and miserable, but Ted the Master of Disastrous Understatement told me before he went out that it “snowed a bit overnight” but that he had shovelled and it was raining so it would probably all be gone soon.  So I told him to drive safely and said goodbye.

I didn’t even realize how bad the weather was until I actually hauled myself out of bed an hour later.  I am NOT a cancelling-due-to-weather person, either – usually.  In this case, however, I was planning to bring one of the other families in our car, and frankly, I don’t want that kind of responsibility.  My own kids, sure, I’ll risk it…. but not hers.

So our only “outing” was across the street to Ms Megan.  We didn’t get there until almost 1:30 because of Naomi Rivka’s lunch dawdling and bathroom nonsense (I suspect she didn’t really go because she is now mortally afraid of imaginary “drips” on her underpants and tights), and when we did arrive, we were the only people there.

She did circle time anyway, and it was nice (okay, absolutely essential to our sanity) to get out of the house, and out of each other’s hair for a few minutes.  It’s kind of like having a second living room, only it’s much bigger than the real living room.  And full of really cool toys.

The only catch – in this weather – is that you have to get bundled and go across the street to get there.  Ugh.  Winter.