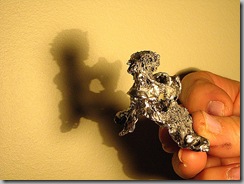 My aunt is Finnish (well, Finnish-Canadian), and they used to have a New Year’s party at their house every year.

Most of the time, kids were invited (they had kids, not much younger than us), but one year,  my parents were invited to go alone, or they left us home for their own convenience; anyway, we got left out.

(As I type this, I am thinking maybe we did go, but fell asleep, or something… in any event, something led to our missing at least part of the revelry; it’s not important to the story.)

Anyway, that time – only that one time that we missed the revelry at least in part, my Finnish aunt decided to revive the centuries-old Finnish New Year’s tradition of foretelling the future year by casting tin (I know this because Google tells me so and even offered me the captivating photo featured above).

Somebody told me it was aluminum, by the way.  Maybe my crazy brother; he’s always been a little bit strange.  So I spent a few minutes Googling “Finnish aluminum-casting customs”, but apparently, there are none that are not carried out in very well-supervised factories.

So my parents went and we didn’t.  And they cast the tin – traditionally, it’s done in a metal ladle over the stove and poured it into cold water, where it sets instantly into a shape which is supposed to represent an omen for the coming year.

(yes; once again, I am probably halachically obligated to stone anyone who actually believes in this thing)

The one my mother brought home (or brought wherever, to show me when she got home and/or when I regained consciousness) was the most intriguing object.  It was not like the one above at all.  It was a tapered, smooth teardrop-shaped object, almost like a cornucopia, but sleekly rounded instead of open at the wider end.

I had no idea what it meant for my or her future.  But I was amazed that my mother, who had shown no other superpowers to date, could create this whatever… out of a blog of whatever.  I just couldn’t stop touching the thing.

I don’t believe tonight is any kind of significant date on my calendar or my people’s, but I am thinking of that cornucopia tonight.  I’m not looking for omens or anything (put that stone down!) but I will say:  I sure do hope 2010 is long, and smooth, and full of plenty.  Oh, and with a clearly-defined point at the end of it all.