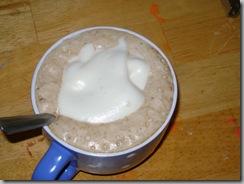 While I still prefer my coffee icy and whipped (here’s my standard frapucippo formula, though I was using coffee ice cubes a lot this summer instead), on mornings when I wake up to a 16 degree home, it’s a little more tempting to think about warmies.

With that in mind, along with my semi-recent discovery that evaporated milk will whip easily, I set out to brew the perfect frothocippo, so to speak.

So this is the result!  My version of a latte, and a very convincing one at that.  Whip about half a cup of evaporated milk with a few teaspoons of sugar – sweeten to taste (I didn’t end up using the whole thing).  (note:  you’ll want to use the whipped milk pretty soon; it doesn’t “hold” the same way cream does)

Brew coffee.  Add whipped milk to decadent European bowl-shaped cup; add hot coffee and stir well.  Keep adding coffee and milk until you have the perfect balance, then top with one more blob of whipped milk.

So there you have it:  not only frugal (though these days, I’m brewing Second Cup ground coffee, which isn’t cheap), but also great for those days when the early risers have inconsiderately glugged down all the regular milk in the house.  (which wasn’t, I should add, the case today, but it certainly is sometimes by the time I’m up and serving breakfast)

Also reasonably lower-fat compared to all the whipped cream the equivalent coffee-shop drink would have.  Also, the milk has its own sweetness that means you may need less sugar than usual.  As a final bonus, I find that sweetening & whipping the milk this way eliminates most of the tinned taste I don’t love whenever I’ve poured it straight into a drink.

Great!  Now all I have to do is figure out what’s for lunch, supper, and somehow entertain four children (2 now; 2 more later) while surviving the next 12 hours ‘till Ted gets home!  Good thing I’ve got coffee!