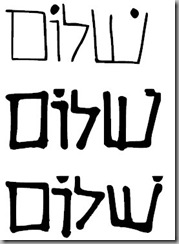 Well, well, well!  After clicking on about 8,000 links promising a “free font generator” I actually found one online!

Here’s how it works:  visit the site, print a template, write the letters AS NEATLY AS POSSIBLE in predetermined boxes for each character, scan the template, upload it at the site and WAAAh-la!  Your own personal lousy messy disaster of a font.

Or three, as I’ve demonstrated at left.  The first two I did are below, but they are way too chunky and the dots kept getting sliced off.  I think the marker should ideally be between these two sizes. 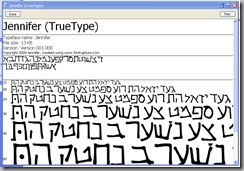 It does look kind of fun and funky (and intentional) with the letters all bunched up together like at right, but if your goal is neatness, well, I would definitely fail Handwriting 101.

Oh – the site is called www.fontcapture.net.  I did find another site called YourFonts (not putting a link in here – they don’t deserve one), but they offer a “free trial” or “free sample” or something, and then turn around and charge $10, plus $5 if you want an extended character set.  fontcapture.net only offers a single page of characters, but at least it really is free.  (at least for now while it’s still in beta so use it now while you can – apparently YourFonts was free last year, too; these days, it most definitely is not)

I decided to try to create a font so I could create Hebrew-verse copywork using the block print that Naomi Rivka is using this year.  She doesn’t seem ready for script, and I don’t want to change things up right now, because she is having so much fun – and success! – with block print.

Anyway, my efforts at creating a font kind of didn’t go so well, so I resorted to simply writing the words and scanning them to put together this preliminary effort.  Very basic, but still… I’m pretty pleased.  Except with the handwriting!  I am such a kindergarten baby in the World of Hebrew! 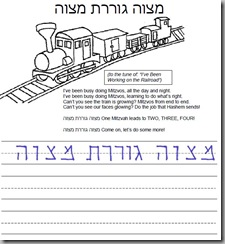 Eek.  Midnight; I’m supposed to be getting good sleep these days.