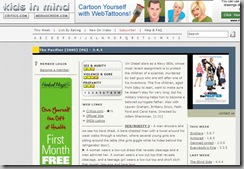 Another parent sent me a link many years ago to a site I love, called "Kids in Mind.”

I really appreciate their 3-point rating system for Sex&Nudity, Violence&Gore, and Profanity – rather than just saying yes or no to a given movie.

The ratings are based on real parents who have seen the movies and rated them, and they're always broken down to list specifics so you can decide, for example, if "darn" is a problem for your family, or a wet t-shirt contest, or a swordfight.

So there you go:  I’m inconsistent.  But somehow, WTWTA is psychologically scary in a way that Shrek simply is not.  It deals with more mature themes, as well, which Kids In Mind discusses in a section on each movie’s rating page which I think is called “Discussion Topics.”

2012, which YM is seeing this weekend with Ted is 3.7.5.  But he’s 15 and has seen much worse.   The big kids’ grandparents in Calgary are not as picky as me, and they watch just about whatever they want while they're there, within reason.  Anyway, it may be good for them to know what kind of stuff they're "missing" so they know it's not all that amazing.

I love the fact that the site gives a quick rundown of the movie's plot, and a "nutshell" moral message (like for the 3rd Pirates of the Caribbean movie, a 4.7.3:  "Acting together as a united front can make a strong enough force to fight seemingly insurmountable odds.").

Some frum kids don’t go see movies; Elisheva’s school had a few challenges while she was there to go the entire Chanukah, or Chol HaMoed, without watching TV or seeing movies.  Bais Yaakov high school actually makes the kids and parents sign a form saying they won’t watch any.

I’m told many parents simply lie… I would never do that just to send a child to a school whose hashkafa is so clearly different from our own.

But my kids don’t see many  movies; maybe four a year.  Just about every time Elisheva asks, there is nothing appropriate playing anyway.  Movies are in general pretty Blah these days.

Oh – another plus of having a website like Kids in Mind to check movie ratings?  (there are other sites out there, but this is my first love)  The kids can’t argue with it, or at least, not much!  They’ve seen over the last five or six years that the ratings and descriptions are usually pretty fair, and also that it is objective – it’s not just me making the call on my own.

Of course, they have ALSO seen me change my mind from a No to a Yes, based on a Kids in Mind rating and review, which is perhaps a useful lesson for all of us.

Having said all of which… I have been fiddling around on the site for a few minutes now and it is currently demanding that I become a member in order to see  reviews.  I don’t know if that’s because I’ve looked at a lot in a row or because I clicked on the membership link out of curiosity.  So now I’m stuck and I can’t look at any more reviews without shelling out.

In any event, membership starts at $12 a year (there are three levels but no difference in what you get with each; it’s basically just a donation), so if your family is planning to see lots of movies, it’s probably more than worthwhile… plus, members get to see the site without ads!