Seen today in the window of the former Ben & Jerry’s location on Queen Street West: 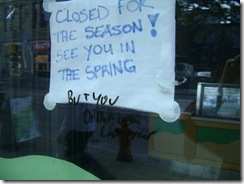 Here’s a close-up, modified a bit so you can read the plaintive scrawl that’s been added to the note: 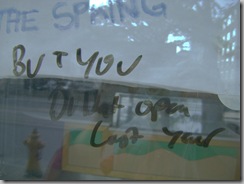 This is the same store that was the scene of our Ben & Jerry’s Earth Day Free Cone Debacle in April of 2008.  It has been closed since then, a year and a half.  I’m surprised nothing else has moved in in its place yet, but there are a lot of closed and empty shops along that stretch of Queen, just west of university.

What with lululemon and other trendoid shops moving in, the small retailers that made the neighbourhood interesting can’t afford the rent.  What a terrible cliché, but how true.