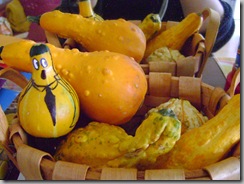 No, seriously, it was fun, fun.  Not as many socks sorted as I was hoping, but otherwise, perfect.  Not too big, not too small.

Exactly enough loot bags to have one left over for Naomi Rivka herself.  Yay!

I did not need another gathering, after Shabbat Party on Friday, 20-something guests over the weekend, plus a Sukkah Hop yesterday afternoon.  I felt like I was putting out the same chips, nachos and pretzels we’d just put away from the Sukkah Hop (okay, that much is true). 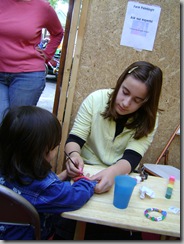 Face painting!  What an easy, brilliant, CHEAP thing to add to any party where a teenage Party Assistant (free labour!) is available to help out.

I had asked my sister Abigail to do it.  She’s artistic, and I figured it would be an easy task to assign her to.  But then Elisheva Chaya got all pouty asking why I hadn’t asked her, and apparently she has experience doing it from carnivals at her school.

And then Naomi Rivka got it into her head that she didn’t want Abigail to do it, and then Abigail wasn’t even there at the beginning (but definitely pulled her weight when she did arrive), so Elisheva ended up doing it.

The truth is, I’m just reluctant to assign a task like that to Elisheva because she’s so  moody and unpredictable.  If you catch her on a good day, after a good breakfast, she’s sweet as anything, and definitely competent.  But on a bad day, I just can’t rely on her.  And I never know what kind of day it’s going to be.

I think everybody is on their best behaviour now, however, because of the shock of not having Yerachmiel Meir here on the first night of Sukkos. 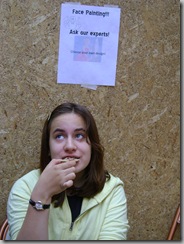 Baking tray covered in triscuits, a dab of pizza/tomato sauce on each, then sprinkle with grated cheese.  Bake at 375 for 10-15 minutes, cool a bit and serve on a plate.  Prepare more right away.  I estimated we’d need one tray/plateful and we went through four.  And that is just for the massive sized “crowd” of eleven children.  (I suspect some mamas and maybe teenage Party Assistants were noshing a bit as well…)

Our neighbour/friend/foster kid came over and noticed the party, made himself right at home.  He started helping himself to cake and stuff and at one point kindly offered to bring cuppycakes home to his mom.  I said he’d better leave it because there were only exactly enough for the invited guests.

We have one very sweet friend down the street who, despite the wording on the invitation (you can’t see it there, but trust me, it says it!) stating that it was NOT a birthday party and to NOT bring a present, brought a present both last year and again this year (I used the exact same text, just changed the date).

Anyway, so Naomi now has a birthday present and a very nice Polly Pocket set.  Worse things in the world than people who don’t read party invitation.

Note for next year:  next year’s party will have BOTH kids’ names… doesn’t make sense to make Naomi Rivka a party just days after her brother’s birthday and then do nothing for him.

The reason she had a sukkah party in the first place, last year, is because I was still too tied up in Newborn Madness when her third birthday rolled around.  So I felt like we didn’t really properly acknowledge her or have her friends over.  And by the fall, when he was one, I felt ready at last to do something for her.

Anyway, I figure it can be “their” party and we’ll just do it at Sukkos instead of birthday for either one of them.

I have found myself deeply wishing we could make his upsherin in the sukkah next year.  But we don’t cut hair on Yom Tov or chol haMoed.  Maybe we’ll leave the sukkah up a few extra days?  Have his party in the sukkah the first Sunday in October?   (Sukkos is way early next year…)

Speaking of which, my mother berated me for saying Sukkos was late last year (I was speaking in the context of apple-picking), because my standard line is always that the yamim tovim are not early OR late:  they always arrive on exactly the same date, every single year.  Just like our birthdays.

It’s the Julian / secular / Gregorian / English calendar that is completely out of whack with our Jewish reality.

(btw, for anyone who cares, Yom Kippur is on Shabbos again next year (2010)… my least favourite occurrence because you lose a Shabbos)

Anyhow, just for the record, Rosh Hashanah, Yom Kippur, Sukkos, Pesach, etc., are never early or late.  They do always fall on exactly the same date; tell that to your non-Jewish friends and relatives.

But anyhow, when some of those dates happen to coincide with the secular months of September or early October, it’s better apple-picking and usually, better weather.

Fun, fun, fun!  That’s the party for this year.  Next up, the apple picking report.  And then bed.  Crash.