I have trouble enjoying most Israeli kids’ books because either the language is too hard or the illustrations are – let’s be honest – kind of weird.

This series suffers a little from the “weirdness.”  I’m not sure what it is… the pictures can be realistic enough, but sometimes, it’s partly that they are too realistic.  Too many details around the fingers and chin makes illustrations kind of creepy, somehow.  Or else the illustrations are meant to be simplistic and cartoony but just end up somehow off, at least to my snobby North American eyes.  There are so many talented Jewish artists… Israel must be crawling with them.  Why do they choose people to illustrate kids’ books who don’t even seem to have the basics down? 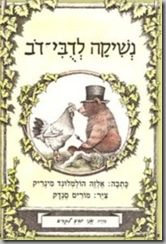 Anyway,  I have tried to find ones I like before, but never really succeeded, which is why I often end up with English books in translation (like Dr. Seuss and the “Dubi-Dov” books, which are lovely translations of Elsa Holmlund Minarik’s Little Bear stories), and illustrated by Maurice Sendak.  We’re also reading “Eretz Yitzurei HaPereh” – Where the Wild Things Are; just in time for the movie release!

So this series is in Hebrew, by Yael Arnon Vered, and they are easily among the more tolerable ones I’ve found.  We’ve taken the first two shown here, Or Soferet Kama (Or Counts How Many) and Or Shoelet Lama (Or Asks Why), out from the library so far.  The Hebrew is easy and rhymes uncloyingly, and the illustrations are usually sweet, though they do veer off a little into weirdness. 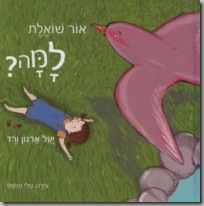 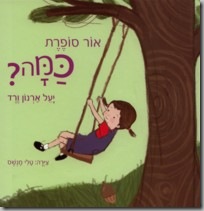 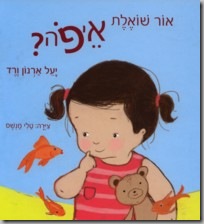 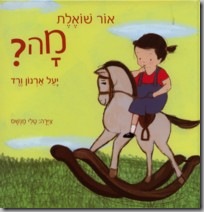 I loved that in the “Lama” book, the mother is explicitly drawn nursing Yoavi, Or’s little brother.  Or asks why he has to nurse… and the answer is, “because he’s hungry!”  Of course that’s why.  (the illustration for that one is a little weird, however; the baby seems disproportionate and a little older than in the previous picture of him).

However, also in “Or Shoelet Lama,” one page features a picture of a huge, weird cartoonish rabbit with a scarf around its neck.  The question asks, “Why does the rabbit sneeze?”  And the answer, of course, is because he left the door open, as in the classic godawful sneezing-rabbit song, HaShafan HaKatan.  But my English-speaking children have never heard this song.  I suppose they don’t care too much, but this reference to a song I have never enjoyed irritates me.

Naomi Rivka really seems to enjoy the main character of Or, who she says is “probably four years old.”  With brown hair and ponytails, she looks a tiny bit like Naomi (but chubbier).  To my eye, and probably to a Hebrew-speaking child, she and her questions would likely seem a bit younger, but I’m happy that Naomi can relate to her.

Beyond the pictures and the language, I like seeing how all of Or’s unceasing questions are happily encouraged by her loving parents, and the books (at least the ones we’ve seen so far) culminate with Or happily swaddled and cherished in her happy home.  I’m looking forward to finding and enjoying the other two with my kids.