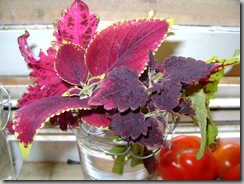 The coleus are back!

Welcome to the the official grand opening of…

For those who aren’t gardeners, October 6th marks Toronto’s average First Frost Date. That means some years we get frost earlier, some years later. Like a baby’s due date, it’s the date you’re pretty much assured you won’t get the first frost.

But it’s a bell curve. After that date, it becomes increasingly less likely that you’ll make it through the night without at least a few sub-zero hours.

The problem with windowsill coleus has always been keeping them afloat in the glasses while they root. The cuttings I start with are all different lengths and widths and the shorter ones tend to slip under the water, especially if they’re sharing a glass with longer cuttings. If they go under for too long, the leaves get slimy and start to rot, and eventually (faster for small vulnerable cuttings and some picky varieties), the cutting dies. 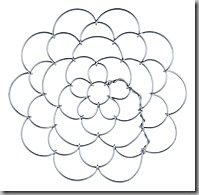 Luckily, coleus are sturdy and I can usually catch them before they drown, but now, perhaps, the good Lee Valley folks may have solved the problem for good with their Flexible Blossom Crown (yes, it’s a slightly strange name).

The crown does indeed flex quite generously over the top of a standard drinking glass, allowing a good-sized “web” over the top of the glass to poke coleus cuttings through. 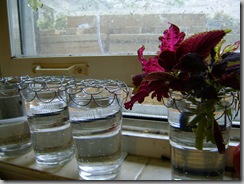 I don’t want to crowd the cuttings too much, so I’ve stuck maybe 5-6 in each glass. There’s only one glass full in this picture, but I have two on the go now… with two glasses left for future cuttings I still need to take from the backyard coleus.

So far, so good! This picture shows a bunch of different-length cuttings (you can kind of see that the bottoms are not even), all leaves perched high and dry above the water.

It’s a delicate balance – no pun intended. The danger with keeping the leaves well above the water level is that some of the shorter cuttings could dry out as the water evaporates. But (see above), coleus are sturdy (now you know why I grow them!) and I can usually catch them before they dry out. Once they have a bit of root stretching farther into the water, they dry out less easily anyway.

Still to bring in:

~ Coleus from the backyard

~ Fuchsia(s) that I want to save

~ Banana! Oh, no! My mother is having her floors redone next week… where will my lovely, beloved banana tree live out the winter?!?