Tribe Finding: Where are all the Jewish Homeschoolers? 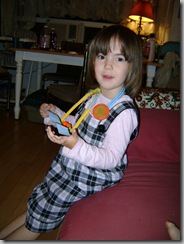 I never expected Jewish homeschooling to be so lonely.

Well, I knew there weren’t a million parents doing it… but NONE?

Not a single other Jewish child over the age of three who is home full-time with a parent?

Forget homeschooling, where are the KIDS, period?  Do no Jewish schools offer half-day kindergarten?  For this year, at least, Naomi Rivka could find plenty of non-Jewish friends to play with in the afternoons, because they’re all in kindergarten in the morning!

Lots of babies.  Especially if I don’t mind playdates with nannies (sigh; I do).

Not a single 4-year-old.  Nobody in a GRADE, for heaven’s sake.

Meanwhile, I am going to try to cultivate other homeschool friends, so she can see that she’s not a freak just because she isn’t in school full day.  Why the heck do we push our kids like that?

Just like the “sigh of relief” parents are supposed to feel after labour day when we can get rid of our kids for the school year… some parents are probably holding their breath until their kid is old enough for kindergarten – or “pre”-school.  The earlier, the better.

There is absolutely nobody in this city who needs another income like we do.  Our bank accounts scrape rock bottom more than a couple of times a year (back-to-school, Pesach, and whenever unforeseen expenses crop up).

But I also believe there is absolutely nobody who needs me like these kids do.  All the kids, even though the older ones would swear up and down that they’d be better off if I dropped off the face of the earth tomorrow (or why not today?).

I admit it, I have totally swallowed the Dr. Laura line:  why have them if you’re not going to raise them?

As for school, well, yes, I am not 100% committed to homeschooling.  Am I that special, are my kids that special, that we couldn’t fit in a mainstream school?  And wouldn’t Naomi benefit from making friends at school?  (how about being stashed in an overcrowded, underfunded room all day with kids arbitrarily all born in 2005?)

Do I sound insincere?  Maybe.

It is true that this city has excellent Jewish schools.

And even more conflict; a bit of history:

I learned once that the foundation of the entire yeshiva school system is the specific premise that parents should not educate their kids themselves.  Why?  Well, some parents could obviously do a very good job, and that was, in fact the case hundreds of years ago.

However, there are also some parents who can’t do a good job, and some kids who don’t have parents.

To create the most universal, democratic school system possible, a system of cheders and yeshivos was created whereby parents sent their kids (okay, sons!) and appointed the teacher as their shaliach, an emissary who did the educating for them.

Which led, somehow, to the system we have today where at two or three they are shuffled into full-day “preschools” (“preschool” is code for “not ready for school yet but we won’t let that stop us”!) to play on our fears that even before they’re potty-trained, they’re already behind.

And that – as parents – we are hopelessly inadequate in the face of professionalized education has become.  We don’t have the tools?  Arms, eyes, head, hands, heart:  those are all you need to teach your children.  Though a decent printer that’s easy on ink can be helpful.  :-)

Some of the myths about homeschooling are simply nonsense:  “she needs the stimulation she’ll get in school” is one I’ve heard a lot… like homeschooled kids spend the day on the sofa!  (okay, we sometimes do; but that’s our choice!!!)

Other myths are more pervasive because they are more ingrained and thus self-fulfilling.

Like the presumed loneliness of homeschooling:  “I would love to homeschool, but we want him to meet other kids.”

There would be other kids, except  all the parents are afraid… because there are no other kids doing it.  That’s why I was holding out some hope for this Jewish Homeschool Co-op.  But I think the word “co-op” has frightened off some parents, and “homeschool” maybe scared away the rest.

Homeschooled kids are not lonely.  Or at least, they don’t have to be.

We shouldn’t have to be.  But we are.