Originally posted August 18th, I went to add a small update today and Windows Live decided to create a completely new post. So to avoid redundancies, I have removed the original post and left the review here, in its new location.

Well, this isn't so much a REVIEW as a ranking of various kosher cheesie things that have crossed my path lately.

Note: for review purposes, "cheesy" is an adjective meaning "of or pertaining to cheese," whereas "cheesie" is a noun meaning "orangey-coloured saltlick of cheddary goodness." So, for example, one could say, "this cheesie sure is cheesy."

Also, for ease of reference: There are two categories of what I'm calling, as an umbrella category, Cheesy Poofs: the smooth-sided hot-dog shaped cheesie (HDSC) and the rougher-textured knobbly cheesy poof (KCP).

Okay, then! In order, from least fave to most fave! 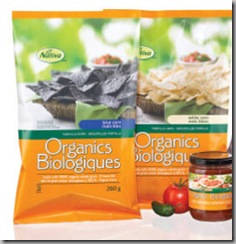 5. Least favourite, based solely on taste (which is dry and nearly saltless aka flavourless) has got to be Nativa, the Shopper's Drug Mart organics brand. I don't even know what they're called - probably "Baked Cheese Curls" or something similar. These are a good, virtuous on-the-go snack for the kids, and I will eat them if there's nothing else. These are a straight extruded, hot-dog shaped cheesie (HDSC), no rough edges to hurt your tongue.

(BUT – and this is a very BIG but, as will yours if you sit and eat cheesies for the sole purpose of reviewing them – kudos to Shopper’s Drug Mart and Nativa for making kosher organic snack foods so widely available – what would we do without them sometimes when we’re stuck downtown with hungry kids???)

When we reach the category of knobbly cheesy poofs (KCP), the chippies really start to fly! This is my favourite category, in general, though Herr's do rank up here as well because they are the classic kosher cheesie snack. 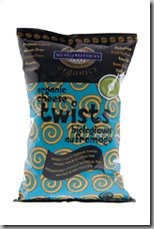 4. Neal Brothers Organic Cheese Twists (KCP) used to be my favourite, not 6 months ago, but apparently, I have swung away from the healthier end of the spectrum, because the next three are both saltier, more flavourful, and probably less healthfully prepared. That's okay, though; I won't waste the good ones on the kiddies!

UPDATE (Oct 25): Well, I don't know if they've changed the formula of these or what, but I had some last week and they were utterly powdery and bland. I guess I'd have to do a blind tasting to see which I dislike more, these or the Nativa (currently in worst place). I just checked the expiry date and these do expire in just a few weeks, but that should mean they are at their best, right? I mean, it says Best BEFORE, and it is before.

3. Drat, drat, drat. I forget the brand (KCP) of the package of cheesy poofs I bought in Superstore the other day. It was right beside the not-kosher Barbara's Bakery Cheese Puffs, and I thought it might be some kind of subsidiary of the same brand. I also thought I had a few left, so I was going to go check, but I just went to the kitchen and they seem to be GONE. :-o (will update if I find the brand, obviously, because they were goooood...!)

UPDATE! (September 13) The "mystery chippies" are Garden of Eatin' (groan...) Baked Crunchitos. (see photo at left, which must be the U.S. packaging, because mine are totally different – pastel-coloured, with a teddy bear).

A re-sampling today assured us that they are, indeed, still quite yummy. 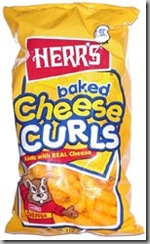 2. In second place: Herr's Baked Cheese Curls (HDSC)... those these are straight extruded, they are salty and yum. These seem to leave the most residue on your fingers, which means they are crammed fully of authentic cheesy goodness, right?

And the CURRENT MOST FAVE fave Award must go to... 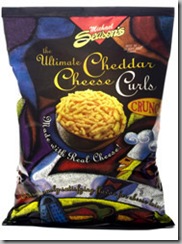 1. Michael Season's Ultimate Cheddar Cheese Curls (KCP)! Picked these up in The Big Carrot yesterday along with the tried-and-true Neal Brothers, and I was very surprised to find that I like them, not only more than the Neal Brothers (which have now dropped to fourth from first place!), but more than any other kosher cheesy snack currently on the market!

Frankly, I am astonished and pleased that there is such tremendous choice on the kosher market these days. I remember it used to be hard to find even one brand, even at Kosher City. There was always Herrs, of course, which is another reason they deserve to be top of the ranking - loyalty.

If there were a Cheesy Poof Wall of Shame (CP-WOS), it would certainly have to feature the "pareve cheesies" I spied one time in Kosher City and perhaps in other stores as well. They looked like cheesies, and may have tasted a bit like cheesies... but they're not fooling anybody, and it's not nice to trick Hashem into thinking you're eating milchigs when you're not. I'm sure He takes His cheesy poofs (HCP) seriously, as they should be.